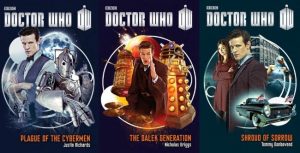 Got a case of Doctor Who 50th anniversary fever? Is the only prescription more Doctor?

Maybe we can help.

Courtesy of Broadway Paperbacks, GeekDad is giving away a set of three newly-released Doctor Who tie-in novels: (Click on any title to read a publisher-provided online excerpt.)

Doctor Who: Plague of the Cybermen, by Justin Richards

and Doctor Who: Shroud of Sorrow, by Tommy Donbavand

These Eleventh Doctor stories accompany the current seventh season adventures, but a fourth book, Doctor Who: Harvest of Time, will feature the Third Doctor, and is set for a June 2 release.

And just in case those stories aren’t cure enough, take two Doctor Who Christmas Specials and call us in the morning: The prize package also includes Blu-ray editions of Doctor Who: A Christmas Carol and Doctor Who: The Doctor, The Widow and the Wardrobe. (Hey – when you’ve got a TARDIS, Christmas comes whenever the heck you feel like it.)

The contest is open to U.S. Residents only, and you need to enter by 9 p.m. Eastern time April 19.

Link to the form if you can’t see it.