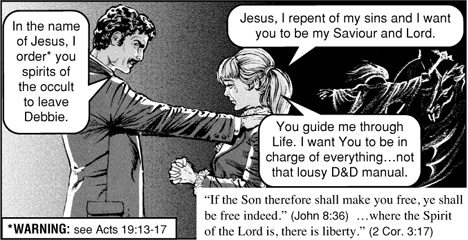 Pat Robertson, former Southern Baptist minister, Chairman of the Christian Broadcasting Network and erstwhile presidential candidate, had this to say last week about the latest blight on America: Dungeons & Dragons.

Wait — Dungeons & Dragons? Yes, D&D is back. And it’s more evil than before.

This would be amusing, if it wasn’t so scary.

Once again, from the front lines or bowels of pop culture, we find another freak out by those who are clueless. No, it’s not violent video games that are poisoning the minds (or loins) of America’s youth. Nor is it the Internet, or texting, or sexting, or Facebook or Twitter. Nor is it rap, or hip hop, or raves, or Oxycontin, or punk, or comic books, or Pixie Stix, or Pop Rocks.

Worse: D&D. That old-fashioned game of dice and graph paper and demonic possession.

It’s as if Robertson was encased in carbonite back in 1980, only to be thawed out by a benevolent Boba Fett three decades later. As if Roberston’s never even heard of Call of Duty, let alone Harry Potter or Pac-Man. And magically, still dripping wet from the dry ice and experiencing the brain freeze of a lifetime, he keeps jabbering away on his show The 700 Club, about magic and evil and the occult, and D&D which, in his words, “it was, like, demonic.” (Yes, he actually, like, said, “like.”) “Stay away from it,” is his advice, in 2013.

Oh how I miss it. The supposed “dangers” of D&D back in its heyday, the 1980s. Its comparison to dancing, rock and roll, horror comics, and heavy metal music. The disappearance of James Dallas Egbert III and the TV movie Mazes and Monsters that capitalized on this new dangerous phenomenon that Robertson says, in 2013, “literally destroyed peoples’ lives.” (Thankfully, D&D also helped launch Tom Hanks’ career.)

But we can’t have those days back. Not unless you are Pat Roberston, who still seems traumatized by all the teens he failed to save back in the Reagan Administration.

5 thoughts on “Back to the Future: Pat Robertson’s D&D Scare Flashback”