Luke on Tatooine. George Lucas tapped into a universal myth. That we all have a special purpose.

So I’m a little late to the 35th anniversary of Star Wars party. Yes, George Lucas’s groundbreaking film was originally released on May 25, 1977, so I missed the big celebration by a few days. But heck, it’s Star Wars week as far as I’m concerned. So if you’ll indulge me, I’d like to impart a few thoughts about the awesomeness of George Lucas’s astounding achievement.

You have to admit it, Star Wars is still an impressive film, even by today’s standards. Even if you like Lucas a little less for tinkering with the original trilogy again and again, adding pointless digital clutter to his already perfectly spare creation, and changing the outcome of scenes (e.g. Han shot first) to please we’re not sure who.

Despite the quibbling, Star Wars had a tremendous impact on me and a lasting influence on the culture. And it helped usher in a resurgence of science fiction — even if it’s not he best example of SF. cite>Star Wars is more a space opera/quest fantasy/western than it is hard SF.

No matter. Think back to 1977. You’re in the theater, like I was that summer, and you’re 11. The words “A long time ago, in a galaxy far, far away” appear on the screen. What is this — a space ship movie or a fairy tale?

Then, the infamous credit scroll — rows of yellow letters drifting away into space. The words “Episode IV” appear. What on earth could that mean? Projectionist, I think you mixed up reel four with reel one. Helloooo up there in the booth?

But “Episode IV” was no mistake. Then we get that endless shot of the Imperial ship. It flies over us and it goes on … and on …and on. And it’s a messy ship, too. Full of nooks and crannies. No sleek and smooth Star Trek space ship. This one is different.

Finally, the topper: There’s nary a line of dialogue between humans, unless you count the brief exchange where Darth Vader accuses Princess Leia of treason and demands the location of the Death Star’s technical plans. Rather, the action centers on two Laurel and Hardy comic relief droids. It’s not until R2-D2 and C-3PO crash-land on Tatooine, well into the first reel, that we meet our true hero, Luke Skywalker, the protagonist through whom I and countless other 70s-era kids took into our hearts and souls.

“Here was a film that emerged from the cynical 1970s to suggest that we might have hope again.”

Here was a film that emerged from the cynical 1970s — a time of post-Vietnam, post-Watergate disillusionment — to suggest that we might have hope again. Star Wars followed such pessimistic downers like 1976′s All the President’s Men, The Omen, Carrie, The Bad News Bears, and 1977′s Saturday Night Fever and Smokey and the Bandit, to name a few. It suggested that swords (light sabers) were the honorable way to settle disputes. That something called “the Force” — a mystical presence — might be a new kind of belief system, practiced by a Gandalf-like Alec Guinness. To me, a kid with zero religious upbringing, the Force seemed as likely an explanation to what controlled the universe as God or Jesus.

I think, in a way, that Star Wars restored my faith in religion. Lucas asked me to believe that some higher power did bind me to the rock, the tree, my sister, that weird neighbor, my fifth grade teacher. I spent a lot of time walking in the woods. And smashing toads between rocks. So I believed.

As for a planet with two suns, Lucas, you had me at sunset. Who cannot be moved by Luke’s yearning and struggle as he gazes out at two stars setting? He’s just a farm kid, bored with chores, dreaming of bigger things. Adventure.

And adventure he finds, thanks to Obi-Wan, and a snide space pirate with a wookiee sidekick who looks and growls like a dog, and a princess they must rescue. Except this princess is no helpless damsel. She can fire a laser blaster with the best of them. And she talks back to men (including Vader). Lucas, you did your homework. America was ready for a strong female lead like Leia.

But here’s the thing that many forget Lucas helped pioneer. His future — actually a “past” set a “long time ago” — looked old, scruffy, beat-up and real. I mentioned that Imperial-class Star Destroyer you see in the opening shot: chunky and a little clunky. Then there’s the Millennium Falcon, as real as your family’s Ford Pinto or Chevy Vega. It didn’t work half the time. You had to bang on it to make the hyperdrive go. Lucas’s vision for a “dirty” science fiction inspired a generation of films, from Ridley Scott’s Alien and Blade Runner, set amidst a hunk of junk space freighter and an urban techno-sprawl, respectively, to George Miller’s Mad Max series, set in a scary, every-man-and-car for itself desert apocalypse.

Plus, like a hot rod from Lucas’s American Graffiti (a film also starring Harrison Ford), the Millennium Falcon was “the fastest hunk of junk in the galaxy,” but like all gals, she was temperamental. She needed TLC. Then she could really move.

And to make Millennium Falcon move, and to make all the ships and laser blasts and light sabers move, you need special effects. What’s remarkable to remember is that Lucas and his then nascent Industrial Light and Magic team did it all with no digital effects whatsoever. Some of the very first computer-controller cameras were used to shoot the miniatures, but other than that, these effects these were pulled off using some of the oldest analog tricks in the book, like blue screens, matte paintings, and cobbled-together Revell and other plastic model parts. These were special effects as no one had seen before, some 365 shots taking years and $3.5 million of Star Wars $11 million budget, and they worked. Lucas’s experts were the ultimate DIYers.

If you were a kid who grew up in the 1970s and 1980s, Star Wars probably inspired you to make your own effects-laden space operas. I know I was. With a Super 8 camera I bothered from my Mom, I made my own space-battle films, dangling my space ships with fishing line in front of a hand-painted star field.

Intentionally or not, George Lucas had done a very clever thing: he had essentially created a new genre, the summer special-effects blockbuster. It became the highest grossing film of all time in its day. By today, that first movie has grossed $775 million, or $1.7 billion adjusted for inflation. The merchandising became a juggernaut. Lucas became a billionaire. And every summer (and spring, and Christmas) thereafter, Hollywood has tried to duplicate the success of that humble film from 1977 which, ironically, all the actors (Ford, Mark Hamill, Carrie Fisher) had assumed would be “a turkey.”

Aside from the James Bond series and various remakes, there were no true franchises in those days. Moviegoers did not line up around the block for tickets, or camp out, like they did for Star Wars. They didn’t see films again and again like the devotion Star Wars sparked. They didn’t snap up action figures and other merchandise like Star Wars inspired. Kids identified with the characters. The fans wanted to BE them. They wanted to inhabit them. They wanted to continue the adventure. That was the power of the film.

Lucas had tapped into a universal myth. That we all have an important purpose. Like Harry Potter, Luke is a disempowered youth with some special power. Like Bilbo and Frodo Baggins who come upon not any old ring but THE ring, Luke is destined to shape the fate of the world. Like these other would-be and reluctant heroes, he is wrapped up in a plot bigger than his own small life. He goes on a quest beyond Tatooine, a place much like Lucas’s childhood hometown of Modesto, California: boring, tiny, Nowheresville. He meets mentors and finds his courage. Out of a wasteland comes the dream and reality of adventure.

Lucas recycled the old myths that Joseph Campbell knew so well. Only he wanted, in his words, to make a “a fun movie to watch.” So what if Star Wars, as the purists grumble, really isn’t sci-fi. It’s more some amalgam of fantasy, western, space opera, Flash Gordon, World War II dog fight movies, pirate movies, monster movies, and Japanese samurai films. His themes are more romantic than cautionary or speculative. Swashbuckling is more fun than dark SF, Lucas seems to say. Although technology is to be feared in the form of the Death Star, the force against technology actually pretty quaint. Obi-Wan admonishes Luke to “Use the Force” and “Let go,” so the kid pushes aside his targeting computer and uses the Force (aka his intuition). The revolution of the Force is that, like some idyllic life of back-to-the-land hobbits in the Shire, it’s about trusting natural forces, not computers and iPads, to make decisions and lead a large, heroic life.

Few movies have entered the popular lexicon as Star Wars. Think of the phrases we use now — like “May the Force be with you.” George Lucas created one of the first movie experiences that became more than just a movie. He created an immersive movie world akin to Tolkien’s literary creation, a seemingly infinite universe we all wanted to play in, visit, even live in. That 11 year old boy named Ethan wanted to. And the 45 year old Ethan still wants to. 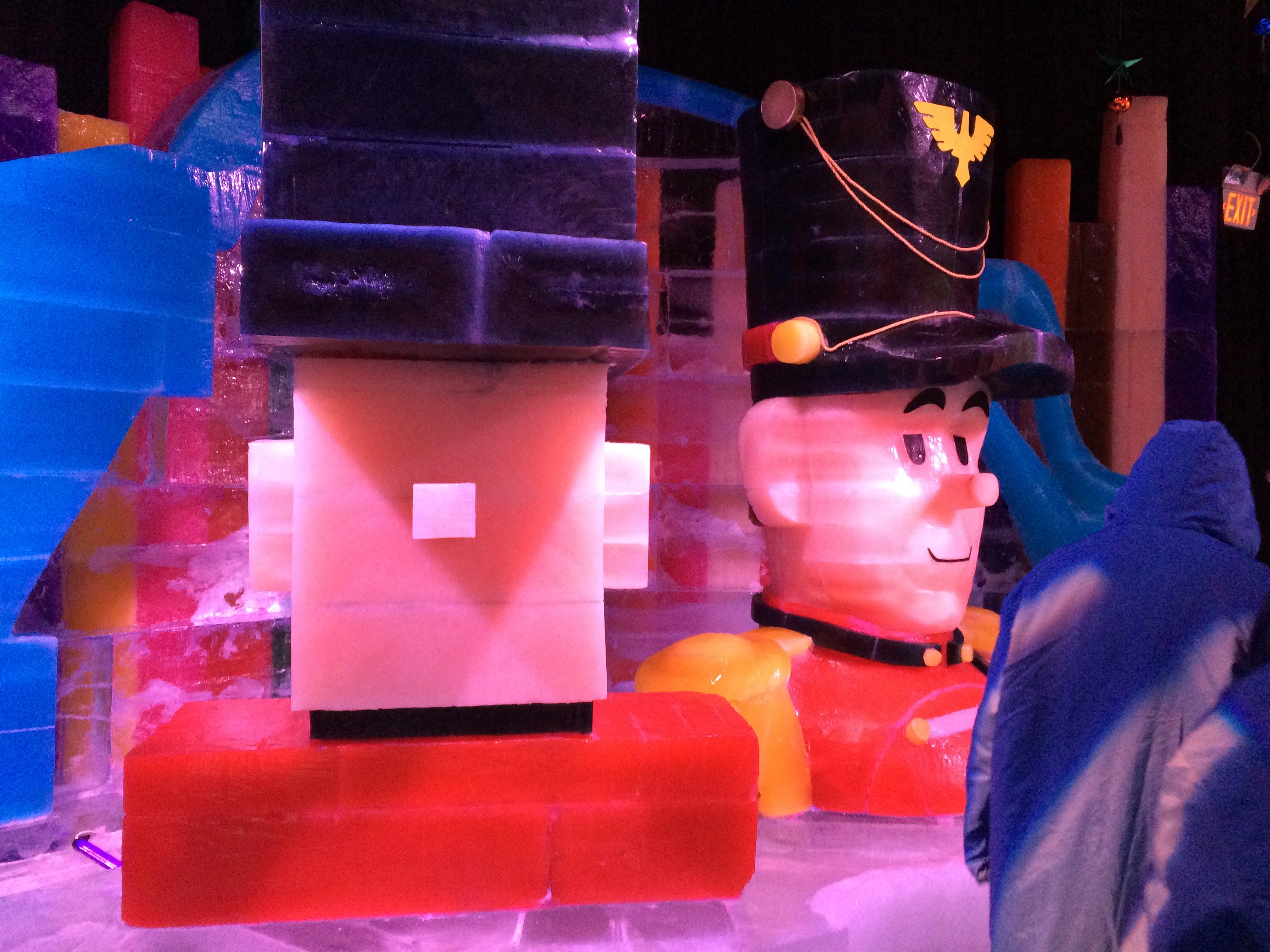 SDCC Costume of the Day