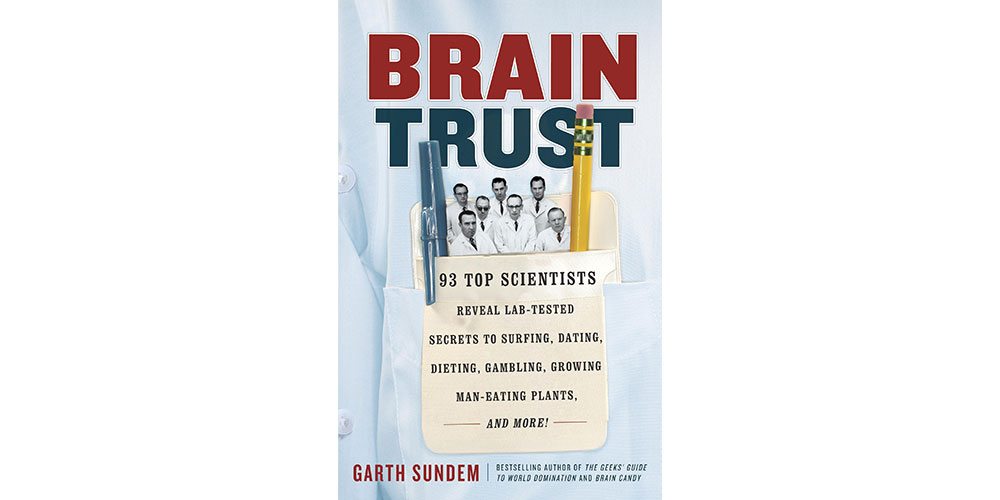 Garth Sundem is a guy whose geek cred should never be called into question. Among his accomplishments, Sundem represented the geek class when he participated in the “Hotties vs. Nerds” episode of the television show Wipeout. He even went so far as to wear a DIY bionic hand to improve his chances on the show.

Besides his obstacle course obsession, Sundem also contributes to the weekly puzzle at GeekDad and is an occasional contributor on this site. What’s more, Sundem is also the author of four wonderfully geeky books: Geek Logik, The Geeks’ Guide to World Domination, Brain Candy, and a new book being released this week: Brain Trust – 93 Top Scientists Reveal Lab-Tested Secrets to Surfing, Dating, Dieting, Gambling, Growing Man-Eating Plants, and More!.

In the new book, Brain Trust, Sundem takes on a nearly a hundred different instances where science intersects life. The book, according to Sundem, “is supposed to be fun and practical, but it’s also one of the most info-dense entities in the known universe (I=mc2).”

To create this literary anomaly, Sundem reached out to an army of psychologists, mathematicians, economists, engineers, and other scientists to find secrets to dozens and dozens of fascinating instances where you can use your mind to achieve great things (or at least get away with a crime in broad daylight).

Among the topics that are covered in Brain Trust, you can learn how to survive Armageddon; how to get bigger, stronger, and faster without exercising; and (as the subtitle suggests) how to grow huge carnivorous plants. Of course, there are many other topics in this eclectic mix and, while you may have heard some of these topics broached before, you’ve likely never heard responses to them from Nobel Laureates, National Medal of Science winners, or MacArthur “genius grant” recipients.

Plus, the book is peppered with hundreds of additional factoids, a number of brain-teasing puzzles, and all of it’s written in Sundem’s quirky, entertaining, and humorous style. No article in the book is longer than 2 or 3 pages, so it makes for quick, easy reading. Still, after every time you pick up the book and read a few bits, you will feel like you’ve really learned something.

To learn more about Sundem’s strategy for taking on this book, I asked him some questions and he was kind enough to supply some answers.

Banks: Brain Trust seems to be a step away from the books you’ve written in the past – why did you decide to write about secrets?

Sundem: I thought maybe I could learn to do things better — win sports bets, eat less, talk to females, trick my wife into doing housework, build flying cyborg beetles — you know, the usual. And it turns out that for everything I can’t do, which is most things, there’s someone who’s studied it and these people are scientists. Talk to enough of them and you can live the scientifically perfect life. Of course, in the post-da-Vinci-Code era, authors are abducted and reprogrammed in underground government facilities if we write books without somehow referencing “secrets” in the title. Really, last time they accidentally overwrote my ability to speak French with stats from 1986 Topps baseball cards and the lyrics of Rapper’s Delight. I’m not keen to find out what’s next.

Banks: What was your methodology for this book – did you go about finding answers to questions or did you just seek out scientists with specific, interesting areas of expertise?

Sundem: By far, my best strategy was getting scientists to sell out their friends — so I went from Steve Strogatz at Cornell, who recommended Luis von Ahn at Carnegie Mellon, who sent me to Eli Berman at UCSD, who sent me to George Akerlof at Berkeley, repeat until hitting word count or forced committal in one of those upstate sanitariums. For a week, maybe I’d find myself in a rich vein of behavioral economists before someone would switch me over to network theorists or medical biologists or social psychologists or entomologists. I specifically tried not to get hung up on my fascinations and instead tried to surf the tide of cutting edge science wherever the scientists pointed. I talked to Robert Bjork about learning and Gabriel Diaz about the network centrality of the Dutch footballer Arjen Robben and Paul Bloom about how you can get more pleasure for less price (information). In short, it was a great and wild ride through the world’s most fascinating, useful, and frequently entertaining minds.

Banks: The book really runs the gamut from finding love to punching harder and everything in between. Was there any topic you enjoyed or surprised you more than others?

Sundem: Well, I always like the math stuff — how to calculate the optimal route between the day’s errands by using sufficing strategies for the traveling salesman problem, how picking unpopular numbers in state lotteries can increase the expected rate of return of your lottery ticket, color coordination games that mimic the payouts of agreeing quickly on a political primary candidate, models of fish schools that show how the aberrant behavior of skateboarding dry pools became a social norm, the tricks of misleading statistics, and why a relative data desert suggests you should bet on cricket and not on football. But I was surprised at how many fields seem to be converging on ways to quantify and predict human behavior — from neuroimaging that can show our buying decisions to social psychologists mining eBay for successful selling strategies. With enough data we can know anything. And with same we can do anything.

Banks: There are some pretty smart people on your list. Did they impart any wisdom beyond what’s in the book?

Sundem: Um, Steven Pinker taught me how Game Theory suggests we bribe cops and sleep with co-workers, but that’s likely not useful in my current, daily life (perhaps more useful in past lives…). What I enjoyed most was scientists’ passion — eventually almost every conversation became like talking to a preteen about her Justin Beiber infatuation. Or, last night I spent twenty minutes talking with my son about who is the most powerful Jedi (he ranks Mace Windu above ROTJ Luke and I strongly disagree) — and it reminded me of the same enthusiasm with which Deborah Gordon talks about ants or Louie Yang talks about the task of slitting open 10,000 insect traps to see what’s inside. Brain Trust ain’t about ivory towers, it’s about what happens when science hits life. It gets messy — but it’s a good messy.

Banks: Did you interview all of these scientists or was some of it from journals, books and things like that?

Sundem: I talked to every last one of these scientists in person or on the phone. Just the logistics alone were mind-boggling, let alone the fact that in some mornings I had to jump from the physics of packed particle materials to the psychology of speed dating to how condensing your eating to eight hours a day can improve the health of mitochondria in your liver. If I bring up another scientific factoid over the dinner table my wife’s going to kill me.