Initially I wasn’t sure about the 90 minute format or the casting of Cumberbatch and Freeman, but this was soon a distant concern. The combination of quick-quipping Holmes cutting through the normal, over emotional, style of this type of series is ingenious. Freeman works equally well as Dr. Watson, taking aim at Holmes’ tendency to be earnest, lacking in humor and overplaying his quivering cheekbones.

In preparation for the second season I finally got round to purchasing the original run of three episodes on Blu-ray ($10 off on Amazon), and was again reminded just how much it borrowed from Heavy Rain’s (PS3) words-on-screen aesthetic.

Now, before you throw your arms up in disbelief, I’m aware this sounds a little farfetched. Yes, each time I suggest this to someone they are usually incredulous, but the similarities are too much too ignore. That and the fact that Sherlock says “Heavy Rain“ just as the series introduces this its word-projection technique (well, not exactly the first, but one of the very early uses).

Season 2 is being aired in the UK and so far I’ve enjoyed it just as much as the original (one of the advantages of being based on our small island). But again I was struck how much it mirrored Heavy Rain. Not only does it continue the words-on-screen approach but it also moves Sherlock closer to the sci-fi leanings of Heavy Rain’s trench coated detective Norman Jayden.

There’s one moment in particular during the second episode of season two (“The Hounds of Baskerville”) where Sherlock asks everyone to leave so he can got to his “Mind Palace” and proceeds to move evidence, images and ideas about in just the same way as Jayden does in his “Additional Reality Interface.”

I know that the real influence on both of these is the source material. Sir Arthur Conan Doyle’s detective stories continue to inspire new adaptations down the ages. The fact that Jayden and Sherlock both have addictive personalities and hint at specific addictions to varying degrees further underlines their common heritage of the inhabitants of 221-B Baker Street.

But still, in its visual tricks and interactions I find it fascinating that Heavy Rain seems to have (at least) lent some influence to this popular BBC series. Whether it’s coincidental or intentional isn’t really the point for me, it’s just nice to see video-games contributing to wider culture in this way.

Either way, make sure you don’t miss out on Sherlock, or Heavy Rain, as both are a rare treat.

The Transformation of Two Stellated Rhombic Dodecahedrons From a Cube 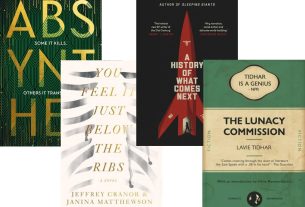 4 Stories of Wars the Never Were – Book Reviews