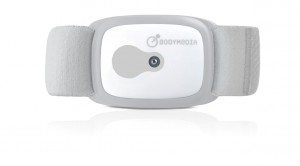 Last week I reviewed the Striiv, and this week I’ll look at the BodyMedia FIT system. Full disclosure: I was provided with a review unit of the CORE system for this evaluation.

The BodyMedia FIT CORE  is available from Amazon and other stores starting at $143 for the basic device, but it’s worth it for the slight upgrade to the version with Bluetooth. They’re also releasing a short term, disposable version that adheres to the skin for a week. The BodyMedia device came in part from the skunkworks at Carnegie Mellon and uses technology developed by IBM.

The strength of the BodyMedia system is that it provides more information than a simple pedometer or activity meter. In addition to steps it can measure periods of intense activity and your sleep levels and quality. The BodyMedia system also allows you to manually track your calories, measurement, and weight. The advantage is that you can more accurately keep track of most of the crucial factors impacting weight loss and see it all in one place.

BodyMedia provides both Android and iOS versions of their mobile app. For the CORE model with no Bluetooth, this provides a historical record of data transferred to the BodyMedia website when you charge the device on your computer via USB. For LINK users, you can see a snapshot of your current activity via Bluetooth. It’s one of the reasons upgrading to the Bluetooth version is worth it for this system. Without a Bluetooth connection, you’re stuck examining historical data. You can’t see anything as it happens.

The mobile app also allows you to enter calorie information, and the Bluetooth connected device can also give you a mobile workout accompanied to music you’ve stored on your phone. The Bluetooth connection makes sure your workout is effective.

If you don’t have a smartphone and you do want to see real-time data, you can get a watch-like display accessory for around $99. It only works with the models without Bluetooth.

BodyMedia claims that this system is clinically proven to help with weight loss, and I believe it. If you can see a behavior, you can change the behavior. However, it’s also the most intrusive of the systems I’ve looked at. Why? To use the system properly, you must wear the armband on your upper arm for 23 out of 24 hours per day. Take it off to charge while you shower, and then put it back on. I spoke with BodyMedia CEO Christine Robins at CES, and she assured me that after five days, most people no longer noticed that they were wearing an armband.

Personally, I did notice I was wearing an armband, and although it became more natural, it never became second nature. It also interfered with clothing choices. Although I could hide the armband under my sleeve, it always seemed either too tight or too loose. It would occasionally fall off, and it was uncomfortable for me to wear while sleeping. Other people may not run into this issue.

The BodyMedia devices cost more than either Striiv or FitBit. Fair enough. They also provide more data. However, you can’t use the device at all unless you have a subscription plan on the BodyMedia website. The plan is currently $6.95 per month with the first three months free. If you genuinely lose weight on this system, that’s still cheaper than many systems.

To be fair, you also get analysis, advice, and suggested routines. You can specify that you want to lose one pound per week, and BodyMedia’s Activity Manager website will tell you the activity level you need to maintain in order to achieve it. You can avoid weight loss pitfalls like crash diets and lousy sleep patterns, and you earn badges when you achieve a new personal best.

This is a tool for the dedicated dieter with a long-term plan. You have to commit to wearing a band on your arm, which may be visibile at times with your clothing choices. You have to commit to calorie tracking, weigh-ins, and data review along with a monthly subscription plan. This is a powerful choice for people making a serious commitment.

It’s also a rather dry commitment. You must be internally motivated by the raw data. While they offer badges for achieving personal bests, it’s hardly the exciting games and walkathons of the Striiv. BodyMedia has opened up their API to developers, so we may end up seeing more fun and games with the armband in the future.  I certainly hope so. There’s a lot of competition out there, and BodyMedia just isn’t exciting me yet.