My wife was in Ottawa for a conference for several days last week and we decided that with our kids at the ages of 8, 8 and 11, now was a pretty good time for them to visit Canada’s capital city. They’re starting to discuss politics and social issues in school, so visiting the center of Canadian government would be something they could put into the context of what they’ve been learning. As an added bonus, Canada just wrapped up a general election at the start of May, so the whole election thing was fresh in their minds. So I pulled them out of school for a few days (this was to be an educational trip, after all), boarded the dogs, piled everyone in the SUV and drove the eight hours from London (Ontario) to Ottawa to meet my wife for three days of government institutions, Canadian heritage and museums.

First of all, Ottawa. Non-Canadian residents, can be forgiven for mistaking Toronto for the capital —it is the capital city of the Province of Ontario, Canada’s largest city and the recipient of much of the international press about Canada— however, Ottawa is our national capital. One of our first stops was the Parliament buildings. The center of Canadian democracy, this is where Canada’s elected representatives and Senate meet to govern the country. Public tours of the buildings are offered, giving guests the opportunity to view the historically rich buildings and see the government in action. Unfortunately, our timing was a little off. Once we’d passed through security, we quickly discovered we were going to be getting the “C” tour. The newly elected members of parliament were undergoing an orientation session, which meant tour groups would not be allowed inside the House of Commons. Our tour guide pointed out that normally, we would at least be able to tour the Senate, but it was closed for a memorial session. To top it off, the Peace Tower was closed to the public because high humidity was making ornate wooden doors stick and no-one wanted to deal with a tourist group being trapped. Which meant only a few rooms were available for viewing, with a lot of time spent climbing narrow, steep marble stairs, traversing long, marble corridors and admiring gothic foyers. The most visually spectacular view was inside the Library of Parliament, a domed, multi-story library dating back to 1876, adorned with wood paneling and housing a vast collection of books. Unfortunately, photography was not permitted within the library (we were told the shutter clicks and flashes annoy the librarians). One of our group who tried to sneak a shot was busted by a security guard, so the parliamentary librarians must have a pretty tough union. If you’re interested in seeing the library, there are a few shots here. While we’ll likely return some day in hopes of that elusive “A” tour, or even the “B” level, it was still an interesting way to spend an hour and as an added bonus, it doesn’t cost anything. One of the three museums we visited was the Canadian Museum of Civilization, billed as Canada’s largest and most popular cultural institution. We walked from our hotel, across the bridge into Gatineau, Quebec (on the other side of the Ottawa river) in order to reach it. While my wife and I enjoyed the museum, if you have school age kids, this one is really set up for them. As the name implies, this is not the sort of museum you visit to see dinosaurs. It’s focused on Canadian culture through the ages, including showcase exhibits about Canada’s First Peoples. Canada Hall was probably our favorite part, a full scale recreation of scenes from 1,000 years of Canadian history. The exhibit takes up nearly 33,000 square feet, is housed beneath a 56 high ceiling and features live actors portraying many of the roles. It covers everything from life in a whaling station to the fur trade and an Alberta oil rig. In an age where everyone tiptoes around confrontation and stays as politically correct as possible, it was refreshing to see that when a group of teenage boys walked past an actor portraying a Metis trader and made a snide remark, he called them on it (while maintaining character), challenging them to come back and repeat their comment to his face. He then put them to work “chopping” wood. They slunk away a few minutes later, looking significantly less cocky. The children’s museum portion of the building was probably worth the price of admission on its own. It was fantastic and huge. I thought our kids might be too old and, while my 11-year-old daughter had enough after a few minutes, my 8-year-old boys could have gone for hours. Everything is interactive, designed for play and colorful. Speaking of admission, the cost is quite reasonable at $30 (Cdn) for a family of five; although we spent $85 on a multi-museum family pass that covered the Museum of Civilization and many others. While some of the sections are a little dull for young kids (particularly those exhibits dealing with political issues), there is still plenty to keep kids and adults occupied for hours. Inside the Children's Museum section of the Canadian Museum of Civilization. Photo by Brad Moon.

The amphibious bus in action in the Ottawa River. Photo by Brad Moon.

As we’ve done in several other Canadian cities that have a waterfront (Toronto and Charlottetown), we took a tour on an amphibious bus, in this case Ottawa’s Lady Dive. These tours tend to be a tad on the expensive side (usually around $100 for about an hour), but we find they’re a great way to see the major sights in a city —often from a unique, water based perspective— it’s nice to give the kids a chance to sit down for an hour or so, and the dramatic entry into the water from the road is always entertaining. The Ottawa tour was quite enjoyable and included a drive by of 24 Sussex Drive (the official residence of the Prime Minister of Canada).

I’ll be putting up a second post about Ottawa later this week, but I’ll leave you with a treat we picked up in the Byward Market. Beavertails are a pastry native to Ottawa, and when US President Barak Obama visited the city in 2009, he had his motorcade stop outside the Byward Market in order to pick up one of these fried dough goodies (we went with one basic cinnamon sugar version and a second coated with maple butter). I hope one of these people is packing Sting, otherwise they really should be running instead of gawking… Outside the National Gallery of Canada. Photo by Brad Moon. 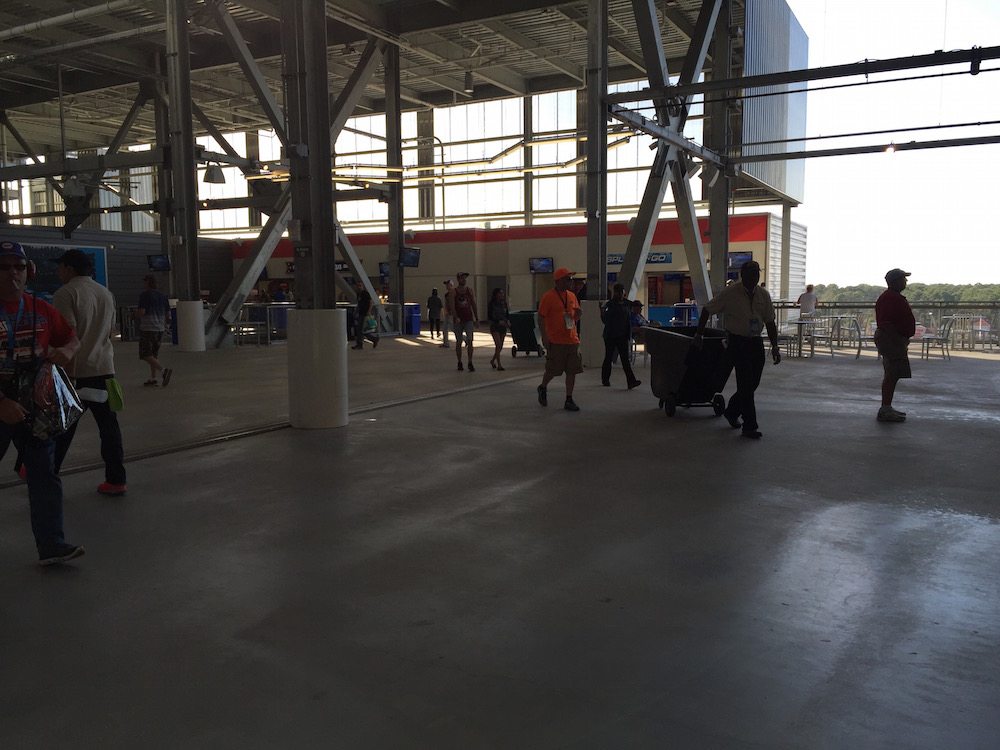 3 Reasons the Daytona 500 Is Better Than NYCC

Places to take your kids: Portland