As a dad with little kids, I know that it’s easy to go through picture books very quickly. Even if you check out a huge stack at the library, by a week later you may feel like you’ve entirely exhausted your patience with some of them. So, with that in mind, I present to you a special Picture Book edition of Stories About Girls. In stories about little kids (or animals), a lot of the time boys and girls could be interchangeable—that is, the story wouldn’t really be all that different if it were a boy or a girl. For instance, in the popular If You Give a Mouse a Cookie

series by Laura Numeroff, it wouldn’t really matter if it’s a little boy or little girl — nor does the gender of the mouse (or pig or moose) matter. But the fact that it’s a boy does make a difference to the listener sometimes. I can’t really speak to the balance of genders in picture books, whether it’s predominantly male or female or somewhat even, but these are all fun picture books featuring girls!

Olivia is a little piglet with a whole lot of imagination. Her books have since inspired a TV show, toys and apparel, even an iPhone app. But it starts off with a very strong-willed piglet with a lot of self-esteem. Yes, she’s kind of annoying at times, but she’s also very funny. Falconer’s wiggly-lined drawings look simple at first but he’s great at capturing expressions with just a few marks. (Just go back and look at the parents’ faces in the books and you’ll see all sorts of subtle reactions.) What’s great about Olivia is that she’s a dreamer, and isn’t afraid to act on her dreams. If you have little kids with wild imaginations, they’ll surely enjoy Olivia. Mo Willems, whom I first encountered in his Don’t Let the Pigeon Drive the Bus!

, has a picture book trilogy about Knuffle Bunny. Trixie has a little yellow stuffed bunny called Knuffle Bunny, and it’s her most favorite toy in the whole world. So of course, it gets lost during a trip to the laundromat and Mom and Dad have to look for it. In Knuffle Bunny Too, Trixie starts preschool and discovers that another little girl has the same bunny—and they get mixed up. Of course, even though they look the same to the adults, the kids both know the difference, and they can’t rest until things are back to normal. In Knuffle Bunny Free, which just came out last year, Trixie is finally getting bigger — but still manages to lose Knuffle Bunny on a plane on a trip to Holland to visit her grandparents. It seems that the poor bunny is really gone this time, but Trixie learns an important lesson about growing up and generosity.

My older daughter has a little dolly that she’s had since she was six months old, and it is now grey and flat—but, oh, the anguish if we can’t find it! So the Knuffle Bunny books really strike a chord with her (and with us). Willems writes these books as only a parent can—because he’s been through all this himself. The pictures in the book are a lot of fun: they’re Willems’ hand-drawn cartoony people set in photographs, and it makes for an really fascinating juxtaposition. by Jeanne Birdsall and Matt Phelan

Jeanne Birdsall, the author of the Penderwicks series, wrote her first picture book last year, illustrated by Matt Phelan (of The Higher Power of Lucky, another great story about a girl). Flora is sick and tired of her little brother Crispin, who has just spilled her paints. When her frustrated mom tells her to take Crispin and go outside, she puts on her “super-special heavy-duty red boots” so the wind won’t blow her away. But she tells the wind that Crispin is only wearing regular old purple boots—and the wind picks him up and whisks him away. Well, Flora kicks off her boots and goes after him, and they keep encountering various creatures and things (a dragonfly, a rainbow, the Man in the Moon) who ask Flora if they can keep Crispin. As she turns them down, she eventually realizes that she should take him home because, after all, he is her brother.

It’s a cute, silly tale. There are a lot of repeated phrases in the book, which is great for little kids to recognize the pattern, and it’s a lot of fun to imagine being swept away by the wind (particularly out here in western Kansas, where the wind does threaten to blow away small children at times). I can’t guarantee that your kids will be more patient with their younger siblings after reading this book, but it’s worth a shot, right? I forget where we first came across Charlie and Lola, but it was in the form of a cartoon series. My kids loved these siblings with their adorable British accents and the fun cut-paper-and-collage animation. Well, the books are just as charming. (I should point out they’re not all written by Lauren Child; some just feature “characters created by” her.) Although the series is called “Charlie and Lola,” I think little Lola tends to be the center of attention and big brother Charlie is more of a supporting player. He’s often the narrator, but Lola is the one who gets into trouble or needs help getting rid of hiccups. Lola has an imaginary friend named Soren Lorenson who shows up in some of the books, and her best friend Lotta is frequently around as well.

The books work best if you can do the British accents, I think, but they’re fun even without. Oh No!: Or How My Science Project Destroyed the World

by Mac Barnett and Dan Santat

Mac Barnett is a hilarious guy, and Oh No! is a short but funny picture book about a little girl whose science project robot goes a bit crazy. I love this one for its Japanese-monster-movie references, the great illustrations by Dan Santat and the idea of a brainy little girl who’s good at science. Plus, you know, a giant robot battling a giant frog. Can’t go wrong with that. I reviewed Oh No! last summer. by Cornelia Funke and Kerstin Meyer

I told you Cornelia Funke would be on these lists a lot. I think we got Pirate Girl as a gift. It’s about Captain Firebeard and the crew of the Horrible Haddock, the most fearsome pirates on the high seas. One day they happen upon Molly in her little sailboat, off on a trip to see her grandma. They tie Molly up and ask for her parents’ names and address, but she refuses. So they put her to work, scrubbing the deck and patching sails, but she never spills the beans. Instead, she writes secret messages in bottles and tosses them overboard when the pirates have their nightly parties. Well, then one day Molly’s mom shows up: Barbarous Bertha, a pirate that makes even Firebeard and his crew shake in fear. The tables are turned, and Molly finally gets to go visit her grandma.

Although Molly needs somebody to rescue her from Firebeard, she’s certainly no pushover. She’s not afraid of the pirates at all and never gives in.

The Wolves in the Walls

by Neil Gaiman and Dave McKean

Neil Gaiman and Dave McKean are a fantastic team, and The Wolves in the Walls is a deliciously creepy story about Lucy and her pig-puppet. She hears noises in the walls and is sure they’re wolves, but can’t convince the rest of the family. Until, of course, the wolves come out of the walls, and then, as they say, it’s all over. Except Lucy isn’t content with that answer. Who says that? What’s all over? Well, the wolves take over the house and throw wild parties and the family huddles at the bottom of the garden, wondering what to do. They’re all ready to give up, but Lucy insists that it’s their house and convinces the family to take it back.

McKean’s illustrations are a combination of photography, ink drawings, paintings and some sort of magic. The people don’t look like real people, but they look like real things. Everything looks just a little bit off, which perfectly matches the tone of the story. It might be a little creepy for very little kids but there’s enough humor and absurdity that I think most kids will enjoy it and won’t suffer from nightmares about wolves creeping about in their walls. by Jon Scieszka and Lane Smith

Math Curse is from another famous children’s book team: Scieszka and Smith have written and illustrated piles of books together (and on their own), but Math Curse is one of my personal favorites. The unnamed protagonist is a little girl who goes to school and hears that “you can think of almost everything as a math problem.” And for the rest of the book, she is haunted by a math curse, asking all sorts of crazy math-related questions. Her whole day turns into word problems, sometimes with bizarre results. (“Which tastes greater? a. 1/2 a pizza. b. 1/2 an apple pie.”) The book is a fun way to get kids thinking about math without being too intimidating—but older kids can actually work out some of the more sensible problems. David Wiesner does some great realistic-looking watercolor illustrations, most often in the service of very unrealistic plots. June 29, 1999 features another geeky girl. Holly Evans, a student in New Jersey, is working on her school science experiment: she has created little floating gardens and launched vegetable seedlings into the sky “to study the effects of extra-terrestrial conditions on vegetable growth and development.” She waits and watches for their return. On June 29, enormous turnips appear in Montana. And then other giant vegetables start appearing all over the country. The bulk of the book is depictions of these strange appearances and the country’s response to them. I won’t ruin the surprise at the end, but Holly realizes that there’s something odd going on when vegetables that she didn’t plant start showing up as well. What happened to her vegetables, anyway?

June 29, 1999 is a delightful picture book from a masterful illustrator. The final entry on this list is by Shaun Tan, a surrealist painter disguised as a children’s book illustrator. (I picked his wordless The Arrival

as on my of my 7 Comics Off the Beaten Path.) The Red Tree was the first book of his I’d seen, and it’s a moody, gloomy book about those times when things just aren’t going your way. Tan turns complex feelings into landscapes and cityscapes, and the little red-haired girl at the center seems hopeless and lost. But there is a hopeful ending, a reassurance that things can get better.

It’s hard to describe this book, but I bought it for my wife years ago when she’d had a terrible day, and although much of the book is dark and foreboding, the ultimate message is one of encouragement and hope. For kids who like looking for hidden images, there’s a red leaf hidden on each page somewhere, a little hint at the uplifting ending. 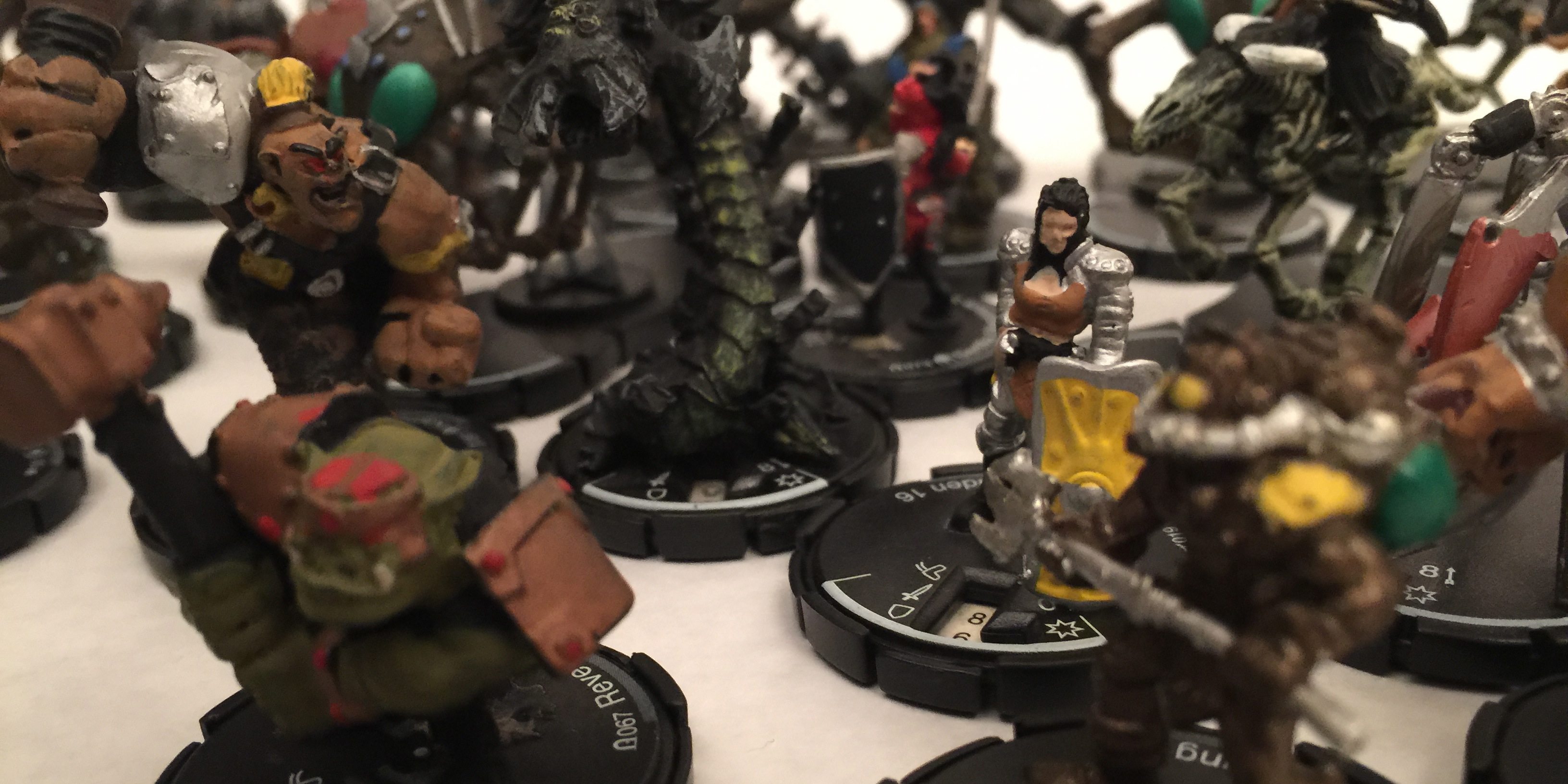