Imagine your kid is too young to care about the weather outside.
Imagine (s)he’s so young (s)he won’t even notice it’s snowing, except if you stick his/her tiny nose to the window and point the strange white falling things, exclaiming loudly “Look! It’s snowing!” (or “Regarde! Il neige!” if your geekling is supposed to understand French better than English, such as mine.)

Then you don’t care about Cabin Fever (yet), do you ?
But being a young parent is a seemingly endless Cabin Fever for you, if not for the baby!
Especially if you’ used to be a gamer. Even worse if you used to be a RPG player.

For let us put things clear:
– your spawn is too young for most games (don’t even talk about RPGs, even if Rebecca pointed some RPGs for/with kids, (s)he’s unfortunately not old enough, even for those)
– even if you’re very lucky parents (nice baby, sleeping the night at an early age, grandparents living nearby, and so on), you won’t be able to go out and play RPG as often as you’d like too.
We are lucky parents. We managed 3 RPG sessions in almost 6 months and actually are quite proud of ourselves.

So, how will you stand this long RPG-less cabin fever?

Here are a few ideas.

If/when you’re alone (or if your Significant Other isn’t that much interested in such games):

– you might play Echo Bazaar, as I suggested a few weeks ago.

– you might try some adventures gamebooks. There are the classics, if you feel really nostalgic about The Warlock of Firetop Mountain (there’s a 25th anniversary edition) in the way Chris remins us on Betterblog:

“You are in the wizards tower. If you go down the clear, well-lit passage that certainly doesn’t contain inescapable death-traps of any sort, turn to paragraph 278 you gullible fool. If you go through the door with the cheerful music behind it, turn to paragraph 40 and be prepared to throw the book against the wall in frustration.”

But there’s also something new and really cool. The same Chris pointed us to different adventure gamebooks: the Fable Lands series. They appear to be classics for certain categories of (English-speaking) RPG geeks, but I hadn’t heard about them before.

The first four books are available on Amazon. I bought and tried the first one, The War Torn Kingdom, and I enjoyed the experience. The really great thing it that the game is defined to remember your past quests and accomplishments from a book to another.
The first book is also available as an iPad App.
Fabled Lands Blog announces they actually plan to write a real RPG… you may hope your kid will then be old enough to let you play (a little) more often.

– while you’re at it, you may opt for multiple-choices games designed for mobile use, such as the wonderful, fun and mature Choice of Games issues. You’ll enjoy the med-fan Choice of the Dragon (“Play as a fire-breathing dragon who sleeps on gold and kidnaps princesses for fun.”), the Anne Rice atmosphere in Choice of the Vampire (“Begin your two-hundred year journey as a vampire in New Orleans, 1815; choose whether you will seek love, power or redemption as you negotiate the growing-pains of the young Republic.”), the wonderful and original Choice of Broadsides (“swashbuckling naval adventure, in the spirit of C. S. Forester’s Hornblower or Patrick O’Brian’s Aubrey/Maturin books, with a dash of Jane Austen.”) and the incredible Tudor-with-magic Choice of Romance (“Play as a young courtier who catches the monarch’s eye.

Will you find true love? Gain a crown? Lose your head? A text-based multiple-choice game of romance, deception and court intrigue.”)
All these games offer great gender issues, allowing you to play a female captain in matriarchal Navy courting elegant stay-at-home men, if you like, or to seduce the Queen as a female courtier and use magic to produce an heir.

All are available for free on the web or as mobile versions.

They even offer you to develop games using their ChoiceScript programming language. I’d love to write such a game… if only I had time… in which I’m sent  back to the newborn’s parenting issue.

If/when there’s two of you, as your Significant Other is as frustrated as you are about your lack of RPG activities :

– you may of course plan and play solo RPGs, but there’s a serious problem here. One of you shall be Game Master and design a whole solo adventure. Well, you probably won’t have time (and energy) enough to do that. Neither will your Significant Other.
If you know about (great) published solo adventures for RPG, please let me know! That’s really hard to find.

– you may decide to play boardgames for a while, in a RPG-like way to partly dismiss your frustration.
There’s another problem here.

BoardgameGeek tried to list cooperative boardgames and found that most are not completely co-op as they featured a GameMaster and/or a traitor… which means they’re not co-op (or not playable) at all if you’re only two.

I love cooperative games. That’s one of the things I actually enjoy in RPGs.

Plus, when I’m playing in couple, I don’t like being put against him. You might enjoy compete your Significant Other, I don’t blame you in the slightest way. I can do it when I have to. One of the great things about Arkham Horror: it’s much more open-minded than Lovecraft’s original stories. Many cool female Investigators and non-Caucasian ones are featured. Disclaimer: some of them come from the extensions.

But anytime I play Dungeon Master at Descent (a great AD&D-like boardgame that perfectly fills the first two issues of the list), I found myself apologizing because I killed his poor adventurers (again)!

As fun as Mansions of Madness sounds, and even if we’ll buy it anyway, it will bring the same problem: one of the players has to be the Game Master.

I found only one game that completely fills the bill, but that’s a great one.
Arkham Horror (and its many worthy extensions) is a wonderful boardgame set in H.P. Lovecraft’s world, like the Call of Cthulhu RPG. It may easily be played at 2 (even if you have to pick 2 Investigators each, if you wanna have a chance to win), it has the greatest re-playability  I ever experienced in a boardgame (at least if you use the extensions) and it’s completely cooperative: you play against the game with no need of a Game Master.
The game is clearly thought to be enjoyed by RPG-players: the many Investigators have backgrounds, special abilities (and even Personal Issues if you choose to play this extension), the Monsters get an “atmosphere” line to be read aloud, the encounters features iconic characters of Lovecraft’s world, and so on.

I highly recommend it.

But I’d love to find a few more games answering my 3-points list. Do you know any others ? 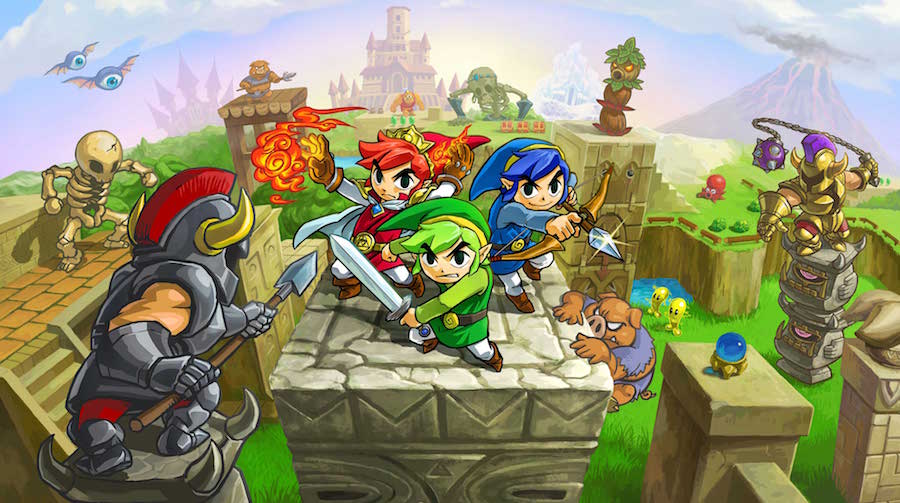 6 Things You Should Know About ‘The Legend of Zelda: Tri Force Heroes’