, the latest Catan game from superstar designer Klaus Teuber, is a boardgame version of Manifest Destiny. Move your pioneers along the trails, found cities, build railroads, and deliver goods to cities—all while taking part in the great westward expansion.

Rating: Superb—the excitement of Oregon Trail without the dysentery!

than Ticket to Ride

), and American history teachers might be able to grab their students’ attention by pulling this out as a visual aid. Settlers of America isn’t just a board game, it’s a history lesson—if you want it to be. The resources available reflect the things that mattered in 19th-century U.S.: longhorn cattle, grains, coal, lumber and ore. There’s still an outlaw, but instead of Soldiers you get the Cavalry. From the covered wagons, to the building of railroads and westward expansion, everything in the game is meant to recall the days of Manifest Destiny. Well, the good parts of it, anyway—the only reference to Native Americans is in a “Native Support” development card and in the explanatory section of the rulebook.

Speaking of the rules, though, there is a lengthy section in the back called the “Almanac” which gives historical information about many of the cards and items in the game, from the history of the transcontinental railway to the gold standard to the first American engineering degree. While none of this is essential to gameplay, it makes for a good brush-up on your U.S. history while you’re waiting for your opponents to decide how to spend their lumber and ore.

The game components are of the same high quality as other Mayfair games: nice small-sized cards, plenty of painted wooden bits, cardboard tokens, plastic dice, and a sturdy (and beautiful) board representing the continental U.S. The board is quite large—33″ x 22″—so you’ll need a good deal of table space for it.

Each player gets 30 wooden rails, 10 or 12 cities (depending on number of players), 2 trains, 2 settlers, and 8 or 10 goods cubes. There’s a wooden bandit, and cardboard Gold tokens in two denominations. There’s a deck of 95 resource cards and 24 development cards, reference cards showing the building costs, and number tokens for the terrain hexes.

Unlike the Catan games, the board isn’t modular hexes—instead, the hexes are printed on the board and will remain the same from game to game (after all, the resources available in the U.S. aren’t going to move around) but there is still some variability due to the placement of the number tokens.

One complaint about the reference cards: they don’t show the “buy a resource for two gold” option on them. What’s odd is that there’s a little reference chart printed on the board itself that looks almost exactly like the cards, and it does include the gold-for-resources. Why not put it on the cards as well?

, but because of the differences and for the sake of those who aren’t familiar with Catan, I’ll briefly outline everything here.

The goal of the game is to deliver all of the goods from your turntable to your opponents’ cities. Everyone starts with 10 goods in a 3-player game or 8 goods in a 4-player game. But to deliver the goods, you have to settle cities, build railroads and move your trains around. And to do those things you’ll have to collect resources and trade.

Each player starts with two cities on the board (either using the basic setup or taking turns choosing in the randomized setup), as well as one railroad track and a train. In the initial setup, only cities in the eastern part of the country can be chosen. All of the city sites (based on actual cities) are marked on the map, and these are the only locations which can be settled.

A player’s turn consists of the following actions:

Production Phase: roll the dice. Any hexes showing the number rolled produce resources, and anyone who has cities bordering those hexes collect the appropriate resource cards. If a “7” is rolled, then no hexes produce and instead the active player moves the outlaw to the hex of their choice. That hex no longer produces any resources until the outlaw is moved again, and the player may take a resource card at random from a player with a city on that hex.

Action Phase: There are a number of actions available, which can be performed in any action and in any order.

Extraordinary Build Phase: after the actions, everyone gets a chance to build and buy, but without trading.

The delivery of goods also has a few other restrictions. When you start the game, there is one goods cube in the center of your turntable which is ready to deliver. All the others are tied to the cities which are spaced around the turntable. Each time you settle a new city (and remove the city piece from the turntable), then the associated goods cube moves to the center and can be delivered. So you can’t deliver goods without having built cities, and you’re also dependent on your opponents to build their cities to be delivered to.

There are some other additional rules which I won’t detail here, but there are ways to earn gold for building tracks as well as for settling some cities. The gold can then be used in trading with other players, to purchase resources from the bank and to pay for right-of-way on railroad tracks.

takes all of the things that made Settlers of Catan the “Monopoly-killer” and puts a new spin on them. While there is still the familiar resource-management mechanics, the difference in the way that cities are settled is interesting. You can’t get boxed in because other players have already built their roads or settlements—if you have enough grain, you could skip the entire Midwest and go straight to the west coast (just like people do now). The other great innovation is the goods delivery system and the combination of things required to deliver all your goods. To win, you must have built all of your cities to free up the goods. But you also must have some connections to other players’ cities to deliver your goods, and either your own railroads or enough gold to pay for right of way on someone else’s tracks.

The whole game is a balancing act—if you focus too much on developing your cities and building up in order to collect resources, other players can start delivering goods while you’re still too far away. On the other hand, if you focus too much on laying tracks and not building cities, then it becomes increasingly difficult to get the resources you need. There’s an interesting mechanic to represent the exhaustion of resources on the east coast. While most of the hexes on the board have numbers printed on them, there are a few which just have question marks. At the beginning of the game, the 12 number tokens (showing 9, 10, and 11) are distributed among the question marks on the eastern part of the board. But as cities farther west are settled, those with question marks get their tokens from hexes back east—which means that those original hexes no longer produce anything. The effect is that you must move west to maintain your necessary supply of resources.

Players of Catan will need to change their strategy a little because the goal is different. It’s easy to get into building up your little empire and forget that the ultimate goal is to deliver all those goods. And since everyone’s turntable is visible, there are no hidden victory points that can suddenly end the game—you know exactly how close everyone else is to success.

I’ve never been much of a history buff (social studies was always by far my least favorite subject) but I actually enjoyed reading through the Almanac and learning how all the pieces of the game tie in to American history. Granted, it’s a period of history that is somewhat conflicted—yay, the United States stretches from sea to shining sea; boo, we ignored any claims the natives had to their land. But I do think the game does a good job of portraying the westward expansion (and the almanac does offer some of that dissenting commentary).

Though the game can take about two hours to play (usually a 3-player game will go a little faster), it doesn’t feel like it drags and I’ve really enjoyed playing it. I still enjoy Catan but it’s refreshing to have an excellent alternative with some things in common. For now, at least, I’ll be more likely to suggest Settlers of America over Catan. If you’re new to the genre, you might do well to start with Catan to get used to the basics first, but Settlers Of America

is a stand-alone game and could probably be learned on its own. I thoroughly enjoy it and highly recommend it.

Wired: Excellent spin on the Catan mechanics; new rules require rethinking of strategy; a history lesson disguised as a board game.

Tired: The thrill of westward expansion is somewhat dimmed by the thought of all that deforestation and the arrogance of Manifest Destiny. 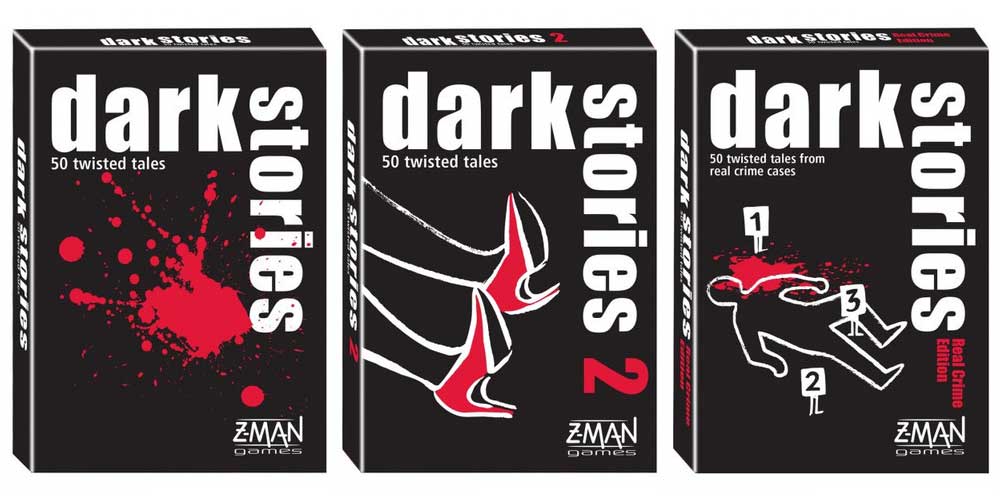 Add Some ‘Dark Stories’ to Your Halloween Festivities