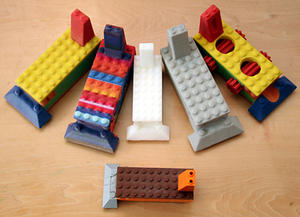 [This post first ran in April, 2007. We re-posted it today just to highlight how far we’ve come in this short time.]

The New York Times has a good article today that does a hands-on test of some 3D scanning and printing technologies. The Lego copies to the right were made by scanning the real Lego at the bottom of the picture, then sending off the (huge) file to two 3D printing services to be fabbed at different sizes and color combinations.

The desktop laser scanner from NextEngine that the writer used costs $2,500, so it’s not quite within consumer range yet (and according to the article, the technology is still too hard for regular folks to use), but that’s only going to get cheaper and better.

The two 3D printing services used were Great Eastern Technology (which charged $70 per object) and Minico, which charges $50 per cubic inch for a different, more durable, process.

Quote from the article:

Tom Clay, chief executive of the Z Corporation, says he is constantly amazed by the uses people find for his products. Doctors use them to build practice models, and museums build replicas so people can feel the object without damaging the real artifact. He thinks one big potential market will be three-dimensional portraiture, so people can create busts for immortality.

If you’ll forgive the self-referential observation, this is the arrival of the “Long Tail of things” that I talk about in the last chapter of my book. 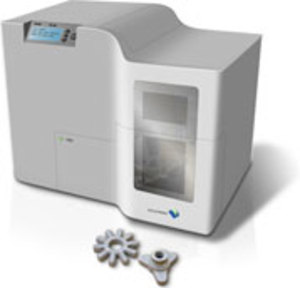 Bill Gross’ new company, DesktopFactory, is about to launch a $5,000-$7,000 3D printer (shown), which looks like the kind of thing a bleeding-edge GeekDad might covet. Yes, I’m referring to myself. Fortunately, Bill has promised me that we’ll get a prototype in the office this fall, so I can do a hands-on review here.

In the meantime, you will soon be able to satisfy your 3D printing jones by designing creatures in Will Wright’s Spore game and sending them off to be printed as custom action figures, delivered to your door.

[UPDATE: EA writes in to say they’re still only considering this and are “investigating the scalability of such an effort, and how to manage packaging and shipping.” Which is to say, 3D printing may not be quite ready for mass acceptance yet. But that never stops a GeekDad.]