Disclaimer: my wife, who is a high school teacher, came up with the idea for this article. As a fairly geeky person herself, my wife is often saddled with technology projects. Currently she is the Lead Teacher for the Information Technology Academy at her school. Her academy teaches students in Adobe Certification, Cisco Certification, Web 2.0, etc. Essentially they teach the kids everything they need in order to do my job. Well, I’ve got seniority, you little punks and I… Oh, sorry…

Anyway, Mrs. Geek recently laid out for me her experience of being on the receiving end of tech-donations. Let me say this right now: donations to schools are appreciated and desperately needed. That said, while some donations to schools are helpful, others are useless to the point of being burdensome. Some donations are definite pluses; those you could categorize as “Keep ’em Coming”. Some donations, people never think of making, but could. Those fall into the “Who Knew?” category. And then there are lots of donations that people make which schools simply cannot use, and the school winds up becoming either a permanent storage facility, or a recycling center, both of which are drains upon the schools resources. Those fall into the “Please Don’t” category. 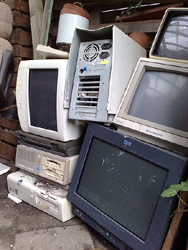 To your average public school cannot do anything with a computer that has no operating system. Their IT department will not install an OS – or any of the software that actually makes the computer useful – because there’s no money to purchase a license. Either give them a computer with the OS and necessary software installed, or donate money along with the computer to purchase the software. If this means that you donate fewer computers, so be it. One useful computer is more good to your local school than five useless ones.

If the computer is too old to install a currently supported operating system and standard software, then don’t bother. There’s nothing that the school can do with it either. A Windows 98 machine will sit in the corner, collect dust, and use up a needed desk. 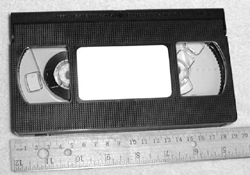 This may vary depending on your local school. However, my wife’s school district is a flat screen only shop.

Send them to the dump with their forgotten Betamax cousins. They can all form a support group with the rotary phone and the horse-drawn buggy.

Power strips with surge protectors are always needed, but rarely donated. No one ever thinks of these for some reason, perhaps because they’re so basic that they’re forgotten. Computer labs at schools are just like the ones at your work. They all need safe places for the appliances to plug.

This technology may be too new to have filtered its way into the mainstream consciousness. The zeitgeist hasn’t gotten the e-mail yet. They’re cheap and they’re replacing the CD/DVD-ROM.

As I alluded to earlier, a computer without basic software is useless. You can write documents in plain text, do a little math, and defrag the harddrive, but that’s about it. You should also be sure that the software you donate is current enough to support, and works with the software and operating system that the school uses, otherwise their IT department probably won’t support it.

Let’s face it: these things get up and walk away. Probably the most useful security cables and locks are the ones which have very long cables. This will give the classroom the flexibility they need when it comes to installation and arrangement.

Kids use up keyboards and mice a lot faster than most adults. The average computer at my work will have anywhere from one to six people working on it in any given day. Throughout the year, the same one to six people will use that computer. Your average computer at a school will have one to six people using it every hour, and then change which one to six people use it. A few issues to bear in mind when donating peripherals to your local school. Find out whether or not the peripherals they currently have are USB or PS/2 and donate the same. My wife recently ran into a problem with the lab where she was donated a load of USB keyboards and PS/2 mice, and then one or the other wouldn’t work after rebooting. You could also donate lot of adapters. 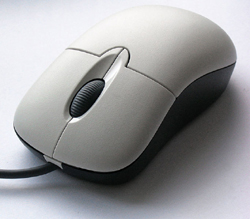 It’s no secret that the workhorses of technology donations to schools are computers which are the cheap, used, or just-a-bit-older computers which aren’t top of the line, but can still cut it. What are good guidelines for something which is older, but still cuts it? Today, I could say “1 gighertz with a quarter-gig RAM, and 40 gigs ROM” but that might not cut it by the time you read this article, or pass the print-out to your buddy working at the local e-waste depot. Think about it this way: whatever is going to be too old to allow on your network by the next round of replacements, might be a good place to start. A good tip: cannibalize all of the good parts (particularly RAM SIMMS) into a smaller number of computers to maximize them as much as possible. Whatever it is, it has to be able to run current software and operating systems.

If your local school district can allow it, donate some time at the school lab. Do some network administration. Obey your moderator. You get the idea. If they can’t allow you to work on their computers (i.e., insurance issues, legal issues, security, etc.) then they can probably use help unloading the truck or selling cookies at the bake sale.

Until the revolution comes, it’s all good.

[This post originally ran last year on GeekDad, but it’s as timely as ever]