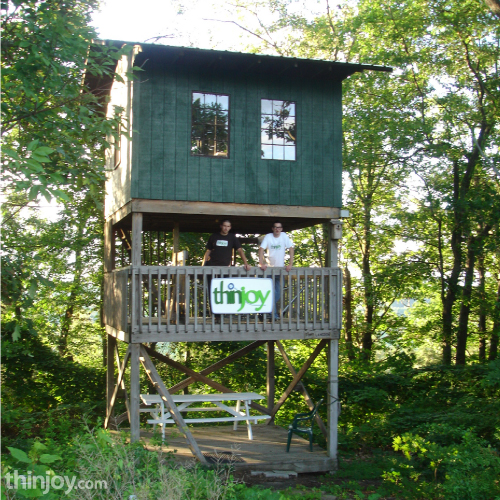 Admit it.  You’ve drooled over the cubicles and indoor cottages that the likes of Google and Pixar provide for their staff. I’ve done my time in cubicle farms and the idea of working in a pimped out version like those corporate gold standards used to be the stuff of dreams.  No more…

When David Langdon e-mailed me about the tree house he uses as an office, it sounded interesting.  I’ve seen variations on the theme before, including Roald Dahl’s strangely fascinating but gross writing shed and these writer in residence shacks on the beach near Provincetown, but they are typically a little lacking in amenities to serve as a full-time office.  Once I saw the photos and read David’s story, well, now I feel sorry for the Pixar suckers in their fake little indoor cottages.  David’s dad built a kick ass tree house on the top of a mountain in Pennsylvania.  Not just any tree house, it’s three stories tall with a view several hundred feet down into a valley below.  Although he apparently had no formal engineering training and was a little too early to benefit from the collective advice of the Internet, David’s dad designed a structure that was not only functional, but built to last; it served as a play fort and sleepover location for years before ultimately morphing to workspace.

What was needed to bring this outdoor oasis to the point where it could make the transition to office?  Apparently nothing a trip to IKEA couldn’t solve.  The tree house boasts electricity, broadband, heat and something the indoor versions can’t touch: not just a natural breeze, but actual swaying in the wind action.  Instead of obnoxious coworkers, cars and buses, David’s commute and workday is filled with deer, turkeys, geese and other wildlife.  To ratchet up that jealousy factor just a few more notches, how about a hammock on the open second level, for the ultimate in summer relaxation between meetings?

He may have a bit of a hike if he gets the urge for a street vendor hotdog, but nothing’s perfect.

The full post is worth a read, and is testimony to the lifelong impact the activities and projects you, as a parent, undertake with your kids can have.  If you can’t get enough tree house, here’s another that Patrick posted last year.

Update: As readers have pointed out, technically this isn’t a tree house.  It is a play fort built among the trees, so let’s split the difference and call it a tree fort.

A New Wallace & Gromit Short Film is Coming for Christmas (in the U.K.)!