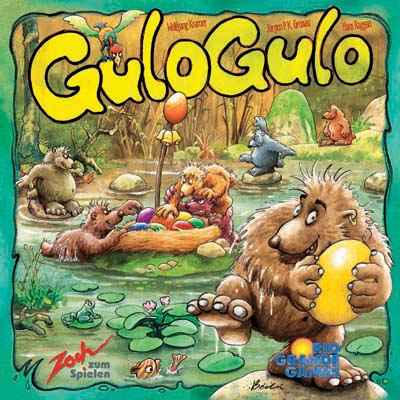 Candy Land and Chutes & Ladders will rot your brain, and games like Sorry! only marginally less so. One of the hardest tasks for geek parents must surely be playing traditional kids’ games with their kids, because so many of them are just mindless racing games that relegate most or all control to random chance. But you needn’t lose all hope, for there are some less-well-known games out there that are perfect for little kids but are actually reasonably challenging for their parents, too.

One of my family’s favorites is Gulo Gulo

. "Gulo gulo" is the species name for wolverines (the animal, not the superhero), and the conceit of the game is that each player is a Gulo, or wolverine, looking for Gulo Junior, who was captured by a vulture while trying to steal one of her eggs. Setup takes only a minute, with shuffling and laying out a path of hexagonal tiles, with a stack at the end containing Gulo Junior, and filling a special wooden bowl with colored eggs and an alarm stick. Gameplay requires no reading skills, merely color identification skills and the ability to follow the simple rules (which are easily enforced by an adult).

It’s the bowl of eggs that is the game’s most innovative feature. The eggs, of different colors and sizes, are mixed by shaking them in a bag, then poured into the provided bowl. Then you have to put in the alarm, a several-inch long stick with an egg-shaped weight on its end. On each player’s turn, a successful 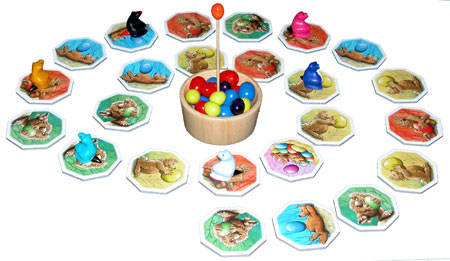 move requires stealing, using only one finger and thumb, an egg of a particular color from the bowl without knocking over the alarm (any time the alarm is knocked over, all the eggs including the ones stolen since the last alarm are remixed and repoured, and the alarm reset). This is the game’s great equalizer, for here adults’ greater ability to strategize runs smack into their much larger fingers. Many is the time I’ve watched in awe as my daughter sticks her six-year-old finger into the bowl and pulls out an egg without the alarm so much as quivering, and I applaud for her quite genuinely, because I know my own 35-year-old finger could never have done it.

I highly recommend this game for anyone with kids between four (or five, depending on the kid, of course) and ten. It’s not interesting enough a game that you’re likely to play it without your kids, but it’s fun and challenging enough that the thought of playing it will never make you cringe. It’s quick, it’s fun, and your kids will be able to win without you throwing the game in their direction. That, for me, was a huge selling point, because the gamer geek in me hates giving in to the geek dad in me by "accidentally" making bad moves so my kids can win against me.

is published in the United States by Rio Grande Games, and retails for $39.95. You can find it for lots cheaper, though.