We watched Ferris Bueller’s Day Off with the kids Friday night.  It had been a long, long time since my wife and I had watched it, and all our fond memories of the movie put us in a mind to share it with the boys, because we knew a lot of the physical humor would appeal to them.  What I didn’t remember was how truly good a movie it was.  Sure, it’s a simple plot: High School Senior decides to take a hookie day from school, and gets his manically depressed best friend and his beautiful girlfriend to come along.  They have a day full of adventures while the school principal plots to catch him, and exact the ultimate punishment – holding Ferris back from graduation (boy, that sure does date the film, doesn’t it?).

I’d like to posit for a moment that Ferris Bueller the character is a metaphor for the Buddha.  Ferris lives life to the fullest, with an almost prophetic understanding of what life has in store for he and his friends, knowing that this one day could be their last together before college and adulthood grab them and turn then into new and different people, severing their adolescent connection.  He pushes their limits, but treats them with an affection and wisdom far beyond his years.  Plus all his mugging to the fourth wall helps reinforce the sense that Ferris is somehow in complete control of it all, omnipotent and omniscient. 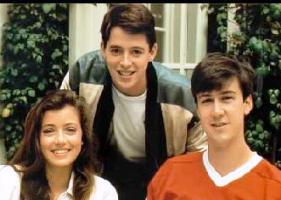 What’s interesting about the movie is that though Ferris (played by
Matthew Broderick in his youthful heyday) is the titular star of the story, he doesn’t grow or change through the film.  In fact, the character who grows the most is Cameron, Ferris’ rich hypochondriac best friend played amazingly by Alan Ruck.

Cameron has a bad home life, with constantly fighting parents.  His father, specifically, seems to love his prize Ferrari more than his own son, and it’s the adventure in the borrowed car that ultimately helps Cameron come to terms with his own depression and lack of direction.

Two cool bits of trivia about Alan Ruck: he was 29 years-old when he played the 18 year-old character Cameron (you couldn’t tell by his looks, but his acting chops certainly showed his maturity); and Ruck has the distinction of being one of the five actors to have played the Captain of the USS Enterprise in an official Star Trek property (he was Captain Harriman in Generations).

Also, a pre-Dirty Dancing Jennifer Grey plays Ferris’ uptight, slightly spoiled sister who spends most of the movie mad at her brother’s effortless flaunting of authority, but finds her own sense of self and happiness with the help of a police-station make-out session with a sage Charlie Sheen.  Did you know she’s Joel Grey’s daughter? That’s so cool!

Probably the biggest question that came to my mind when watching the movie (other than whether it was really a good idea – we’d forgotten it was PG-13, and the language truly earned that rating), was whether Ferris was a geek.  He obviously wasn’t a jock or a nerd (though he hacks the school computers to change his attendance – certainly a call-back to Broderick’s part in Wargames), and indeed he had a very beautiful girlfriend (Mia Sara) and a certain cache’ in the student body (when it’s heard he’s home sick, the rumor that he’s dying and needs a kidney results in a school-wide outpouring of affection).  But he seems like the smart, outsider kind of kid who would be into RPGs, and theater, and being outside of the mainstream.  Maybe his level of comfort in his own shoes suggests he is the ultimate geek, aware and totally accepting of his outside status to the point that he becomes popular because of it.  He is a geek to aspire to.

But maybe that’s too much analysis. It is just a movie, after all.

So, this being a geeky parenting blog, we’re down to the final question: should you share this movie with your kids?  I’d say yes, but only if they are a bit older, or you’ve developed a good understanding with them about hearing adult language in films.  Ferris Bueller is a fun movie for parents who grew up in the ’80s and for kids who will appreciate the physical humor and flaunting of abused authority, and it isn’t terribly dated in look or feel.