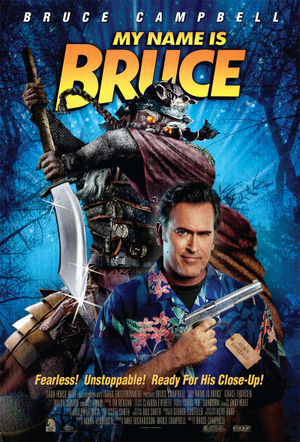 In the pantheon of geek heroes, there are few higher than Bruce Campbell. He of The Evil Dead series, Jack of All Trades, Xena, Bubb ho-Tep, Spiderman, and Burn Notice is a legendary figure in B-movies, and someone we all follow well-nigh religiously.  If you have indeed been following, you’ll already know Bruce has been traveling the country lately promoting his new self-made movie, My Name is Bruce, showing it in limited release and holding Q&A sessions in indie theaters. The movie is set to hit DVD shelves in March of next year, but now we don’t have to wait for our next dose of Bruce coolness: starting today, My Name is Bruce is electronically rentable via the Amazon Video on Demand service!

So tonight, New Year’s Eve, we’re taking the family over to some friends’ house with our LCD projector, screen and laptop, and will be ushering in the new year with a healthy shot of Bruce Campbell goodness!  Who knows, it could become a tradition!

UPDATE: Here’s the quick review of My Name is Bruce: AWESOME! This movie is everything you could want a Bruce Campbell film to be.  It’s a schlocky low-budget horror flick, with lots of humor and a scary, but rather silly monster.  There are tons of classic Bruce-isms in it, but the movie is VERY aware of itself and the fans who will be watching it. It was the perfect movie to watch with a group of other geeks (including some folks who were not already Bruce fans).  And we’re all still singing the theme song!