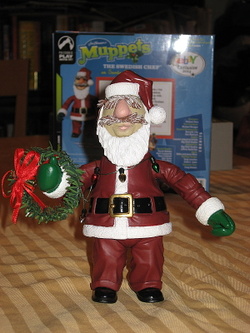 Every now and then, you find a gift that practically jumps up and tells you how perfect it’d be for someone in your life. For me, that moment came last summer, when I was searching for Muppet-related things on eBay and came across someone selling a collectible figure of the Swedish Chef dressed as Santa Claus

. I knew immediately that it would be a perfect Christmas gift for my son, who loves the Muppets and particularly the Swedish Chef, so I bid on it, and won.

The figure was made by Palisades Toys, which made Muppets figures for about five years, as an eBay exclusive in 2004. Lots of other exclusives were made, for all sorts of events and groups—my favorites are Super Beaker and Kermit dressed as Indiana Jones

. The Swedish Chef figure comes wearing a full Santa suit, with a white "fake" beard contrasting the Chef’s "real" mustache. The legs and arms articulate, and the Santa hat comes off and reattaches via magnet. The Chef’s eybrows and mustache are dusted with white for effect, and the box includes a string of (plastic) Christmas lights and a small wreath with a bell and a ribbon. The funniest part, in my opinion, is the back of the box, which has an alternate version of a verse from "A Visit from St. Nicholas":

He was chubby and plump, and he made quite a fuss,
Blasting dough into donuts with his blunderbuss;
In the wink of an eye, the man splattered the walls,
By using a racket to serve up meatballs.
He muttered and hummed, as he chopped and flambéed,
Startled only by the lobster bandits’ crusade.
Coating "moose" in the chocolate was his next tasky,
Then he scored a fowl shot with "Chickee-in-der-baskee."

Then he tossed up his spatula, and called out his crew,
Penguins, chickens and rats, and singing fruit, too…
And I heard him exclaim, dropping spoon, knife, and fork,

My son loves the figure, and (after he’d played with his new Nintendo DS and lightsaber for a while, but one must have priorities) spent quite a while walking around with the Swedish Chef Santa, talking for him with his best imitation of the Chef.

I realize it’s a bit early to be planning your Christmas gifts for this year, but if you have a Muppets fan on your list, the Swedish Chef Santa Claus

is a gift they’ll probably enjoy and are pretty unlikely to expect.