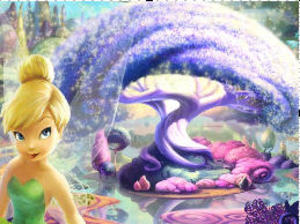 Before taking flight in Pixie Hollow, you must create your fairy — and the depth of character customization is pretty good. The ability to minutely tweak your character is surprising, but ultimately, when rendered to playing size, most characters look fairly similar with the exception of their colors. The character’s name – in an effort to police and prevent unacceptable behavior (just like the textual interaction with other players) – must be chosen from a pre-approved list. So instead of Theodosia McTootsalot, we ended up with the very appropriately Disney-esque moniker, Misty Morningsparkle.

With our pixie ready for takeoff, we flew headlong into Pixie Hollow.

The first impressions of the environment were very favorable. The scenery was lush and beautiful. With an abundance of flowers (and a healthy dose of Gaussian blur), the Hollow was a dreamlike treat for the eyes. Movement is pretty simple — click where you want to go and your avatar flies there, leaving behind a trail of magical fairy dust.

Our initial opinion of Pixie Hollow was positive, but our sense of wonder was about to take a nose dive. 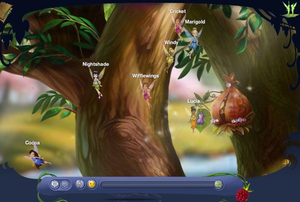 Pixie Hollow consists of a series of similar-looking environments. Each location where your fairy can play is actually pretty small, with areas consisting of just a few destinations to visit. While it varies from area to area, there’s at least one store, and a shortcut or two to different locations. In some locales there’s a simple and fun mini-game that users can play to earn items, such as flower petals and spider webs. These rewards can be used to construct items for your fairy’s house or as currency in Pixie Hollow stores.

And that’s the bulk of what players do in Pixie Hollow — travel from one location to the next and do the same things over and over.
Granted the mini-games are decent and we had some fun with them, but my daughters quickly lost interest. Each time I encouraged them to give Pixie
Hollow another try, they would only play for a few minutes before closing the browser and finding something else to do.

As can be expected, there are a number of Pixie Hollow tie-in toys that kids can play with offline, including both figures and playsets.
Purchasing these real world toys give the child an access code that unlocks virtual goods in Pixie Hollow.

But the toys that intrigued me were jewelry items called Clickables. These bracelets and necklaces allow users to trade virtual goods and add online friends during their time in the real world. It works like this: Let’s say two kids run into each other at recess and both have their own Clickables bracelet. By simply clicking the bracelets together on the playground (and later uploading via USB cable), they become friends online and are able to share virtual goods. It’s an interesting idea, to say the least.

But this gets to one of my big complaints about Pixie Hollow.
Although the game is pretty and – in parts – fun for kids to play, there is such a heavy emphasis on consumerism. Granted, this is Disney we are talking about, who have raised merchandising and marketing to a high art form, but what started as a $5 a month game could easily turn into an expensive habit with all of the associated toys, baubles and add-ons.

However, there is a free version of the game too. In the free version, players are able to do pretty much everything except buy new outfits and accessories. (Why would you pay for membership again?)

The Surrogates: Know the Comic Before the Movie