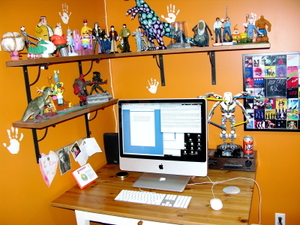 One of the geekier things that my kids and I have in common is an appreciation for action figures; you can probably tell that from this snapshot of my office. I don’t keep everything sealed in the original boxes -which immediately disqualifies me from “serious collector” status- but what’s the fun if we can’t play with them now and then? Kids may like boxes, but having to look at a tantalizing action figure sealed just out of reach inside its protective packaging is just not right. I also have a habit of mixing it up, so instead of specializing in, say, Marvel superhero figures, I’ll happily throw Darth Vader, The Thing, (Yellow Submarine era) Beatles and a T-Rex together. Apparently that’s a no-no too. Yup, Comic Book Guy would absolutely eviscerate me.

Today marks my first GeekDad post of 2009, and I thought I’d use the occasion to kick off what I hope becomes a regular feature on the world of action figures from my enthusiast, but not “handle with white gloves, alarm on the display cabinet” perspective.

Just in time for this first run, Canada Post showed up with some goodies over the past few weeks.

First up is an unlikely pair from Mezco Toyz. Based on the 1979 cult movie (and subsequent video game) The Warriors, a limited edition run of highly posable 9-inch figures was released in December. I received the Orphans Leader figure and can vouch for the realism of his facial features and his ability to be posed in all sorts of cool fighting stances (thanks to three different sets of interchangeable hands, forty points of articulation and a base that allows for full-flight kicks). Orphan Leader arrived in a dual window tome box (wasted on me) complete with accessories and is dressed in an authentic cloth ensemble. Celebrating the film’s year of release, there are only 1979 of each figure being released, so you have an instant collector’s item on your hands. Besides Orphan Leader, the set includes Baseball Fury, Cyrus, Ajax and Swan. These guys probably aren’t the best choice for the younger kids -what with the razors and all- but if you’re a fan of the movie or the video game, here’s your chance to relive the brawls on your desktop. Assuming you’re willing to crack open the box, of course.

Mezco also sent along a copy of Hellboy, from the 3-3/4-inch Hellboy II: The Golden Army collection. Hell yeah! Santa brought a Blu-Ray copy of the movie, so I’m still in a Hellboy kind of place. Based on the sample I have, this is a nicely detailed set, well-articulated and equipped with the expected firepower; suited for movie memorabilia collectors with limited space and it seems sturdy enough to stand up to playing as well. Also in the set are Liz Sherman, Johann and Wink. If the kids are looking for a slightly cuddlier version of the Hellboy experience, Mezco also just released a series of 2-inch Hellboy II “BPRD Buddies.” 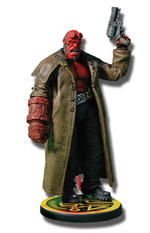 A final Mezco mention goes out to the Spirit 12-inch figure. The movie may not have been the greatest -OK, it’s been pretty much universally panned, including by the folks at Wired (whom you would think might be among the more sympathetic reviewers given the source material)- but this action figure deserves better. It has to suck from a marketing perspective to have your product tied to a movie that’s fallen flat on its face, but that’s the risk of promotional tie-ins, right? There were enough fans of the comic book out there for the 12-inch Spirit to sell out online, but the 7-inch versions are still available in toy stores. 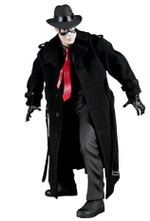 Wrapping up this first edition of the action figure report is a unique offering from a rather unique company we’ve mentioned several times in the past month or two. Nemo Publishing (of The Undersea Adventures of Cap’n Eli fame) sent over one of their brand new, classic Mego-style 1950′s Commander X action figures. As you can see from the photo, Commander X definitely captures that retro Mego vibe. Commander X is 8″ tall, retails for under 20 bucks and ships with a free Capt’n Eli comic book. There’s mention on the web site of possible variants in the works and, based on the teaser artwork on the 1950′s Commander X figure packaging, this has the potential to be a pretty interesting collection.

Magic: The Gathering’s Shards of Alara Set to Debut