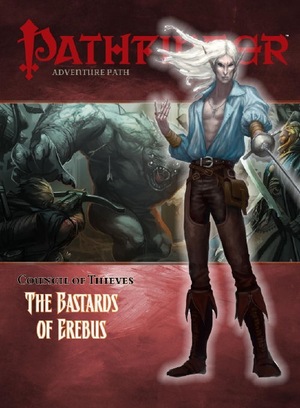 GeekDads tend to be busy, and haunting a game store looking for the latest and greatest often isn’t an option. And for those of us lucky enough to be able to game on a regular basis, just having everything you need for a campaign is a wonderful help.

Paizo Publishing’s Pathfinder Adventure Path packages up everything busy gamemasters need and mails it to their homes.

Each campaign has six monthly 96-page installments using edition 3.5 of D&D’s rules (Paizo has declined to license 4E. Once you subscribe, the installments come straight to your mailbox — you get a full year (two campaigns) for your subscription price. You get a searchable PDF version with every paper copy, and you can extract digital maps from the PDFs and print them large-scale for use as tabletop gaming aids. You also get a 15% discount with the rest of the stuff at Paizo’s store.

(We’ve commented on Paizo’s subscription model before. You can subscribe to their pulp fiction line Planet Stories, as well as a variety of their in-house gaming products.)

The Council of Thieves Adventure Path starts with a bang in the crumbling metropolis of Westcrown, former capital of Cheliax, a once-proud empire now reduced to political infighting and ruled by a revolutionary aristocracy in league with the vilest devils of Hell. Decadent nobles and desperate rebels face off against a backdrop of crumbling buildings and badly eroded stability. When a gang of devil-blooded bandits called the Bastards of Erebus threaten Westcrown’s delicate status quo, the heroes must face sinister beasts of shadow, relentless armored Hellknights, and whispered rumors of a return to power of the city’s legendary criminal guild. What mysterious force is pulling the strings of the shadowy Council of Thieves, and what do its machinations mean for the heroes and all of Cheliax itself?

If you’re interested in learning more, check out the December 5th edition of Atomic Array, the independent RPG podcast hosted by Rone Barton and Ed Healy. They’ll have Jason Bullman, lead designer of the Pathfinder RPG and James Jacobs, editor-in-chief of the Pathfinder Adventure Path as their guests.