Last week I posted on the splendor of Punkin Chunkin.  For those that were unable to make it but would like to see what all the fuss is about, I have good news.  The Science Channel is doing a full show on Thanksgiving night at 9:00 as part of its new Demolition Day Marathon.   This might be a little late for the kids, so you may want to have them check it out at 4:00 pm the next day. 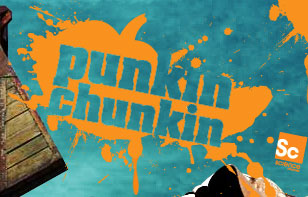 Part awesome science experiment, part genuine Americana, this one hour special, hosted by comedian Brad Sherwood (Whose Line is it Anyway?), documents the ingenuity of the biggest, loudest, greatest pumpkin hurling competition in the world.  Sherwood will follow select teams as
they journey from machine design to testing their equipment to the competition’s climactic finale, where every team hopes to reach the one mile mark.

PUNKIN CHUNKIN covers every angle of the intense competition from growing special, aerodynamic pumpkins and determining the perfect pumpkin’s mass to the mechanics of the air cannon and the physics of catapults.  Viewers will not only get an in-depth look at the history and rules of the struggle for pumpkin launching supremacy, but will learn the  engineering science behind the competition from Dr. Frank Wilczek, the 2004 Nobel Prize winner in Physics.  After all, reaching the holy grail of chunking–launching a pumpkin one mile–requires factoring in wind speed, pitch and the hurler’s elevation in addition to the pumpkin’s mass, shape, size and stiffness.

Sounds like the perfect thing to have on while your polishing off that pumpkin pie.

Battle Machines Take to the Air

Second Opinion: A GeekMom On The 3DS