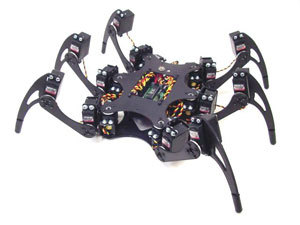 Trossen has come out with a couple new robots, right at the moment when I need to be spending on toys for the kids instead of myself.  Either of these would be cool, and with luck I might get one for R&D, but it’ll have to wait til after the holidays.

First up is the Phoenix Hexapod Kit.  This guy comes as a kit, but is pre-programmed with a number of walking gates, PS2 style remote, and sturdy aluminum components.  Powered by a Basic Atom Pro 28 and 18 servos there are a lot of possibilities.  Add some sensors and make him aware of your suroundings, or compete in a local robot challenge.  With a little practice you could even program it to compete with the Ministry of Silly Walks.

Following close on my wishlist is the new MechRC Humaoid Robot.  MechRC is similar to many other humanoids, but he has a few features that set him apart.  17 metal gear servos should give him the power and durability to perform some impressive moves.  A fluid 3D visual programming environment allows even novices to quickly generate programs.  A speaker in his chest lets you choose a soundtrack to accompany his awesome dance moves.

Video after the jump.

GeekDad Puzzle of the Week: Captain Danger and the Spheres of Death