Last Saturday night, we went to see Video Games Live, a retrospective that celebrates more than three decades of video game music. And for two and a half hours, I could not stop smiling.

We arrived early, understanding there would be pre-concert festivities. A half dozen people had recycled their costumes from Halloween, the night before, to enter the costume contest. Nearby, a long line of people waited for the opportunity to enter the Guitar Hero competition. It was interesting for about five minutes, then we got bored, so we found our seats and waited for the show by (what else?) playing games on our iPhones.

Eventually, the concert started and the local symphony erupted under the guidance of conductor/composer/co-creator, Jack Wall.  The show began with a ten minute medley of songs set to old game clips on a large video board behind the orchestra and choir. Animations from Ghosts N Goblins, Outrun, Road Rash, Defender, Contra, Joust and many, many more flashed across the screen as the symphony built to a crescendo before abruptly stopping. The crowd erupted with applause and cheers.

Then the voice of Solid Snake, David Hayter, introduced Video Games Live co-creator and longtime game soundtrack composer, Tommy Tallarico, who served as the evening’s host. He set the stage for several pieces during the first act, starting with (of course) Pong, before moving on to Metal Gear Solid, God of War, and both the Sonic and Zelda series. Koji Kondo was one of several composers who appeared on video to talk about their work. 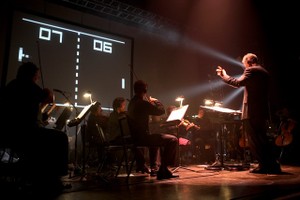 The first act included voting for the costume contest (a cute kid dressed as Mario won) and an interactive game of Space Invaders – one lucky fan went up on stage and donned a shirt with a cannon on his back. On the screen, the game appeared and, armed with a joystick, he tried to clear the board in less than two minutes. His lateral movement on the stage was mimicked on the screen.

After an hour, Tallarico announced a short intermission and a loading bar popped up on the screen to show the time until the second act began. Shortly before the intermission ended, another compilation video started, titled "My Childhood in Four Minutes". This one started out heavy on NES games — 720º, Baseball All Stars, Mega Man, Excite Bike and Mike Tyson’s Punch Out were just a few of the games featured — before branching out to arcade classics like Gauntlet, Off Road, Galaga and Frogger.

The second hour was more of the same, featuring music and images from Mario, Warcraft, Metroid, Halo, Kingdom Hearts, Final Fantasy VII and the upcoming Starcraft II. Over the course of the evening, the music from more than 20 games were played with accompanying game video.

One of the evening’s highlights came midway through the second set when the winner of the Guitar Hero contest was invited to take the stage with the symphony and Tallarico, who was playing guitar at this point. The contestant was tasked with scoring better than 170K on "Sweet Emotion" on Hard. Full of the bravado and confidence that plague the young, the contestant said he wanted to play on Expert. He missed the very first note, but did much better afterwards. Ultimately, he fell short by 7K, but won a prize anyway.

The evening was a blast, the nostalgia of game music and images triggered so many memories, my thumbs had phantom aches by the end of the night. Listening to the simplicity of the Mario series, contrasted to the Gregorian chants and complexity of the Halo soundtrack, it was a dramatic representation of how far video games have come in a very short time.

All in all, it was a wildly fun evening and the geeklets got a kick out of it too, recognizing many of the games that they have either played (using MAME) or recognized from watching this GeekDad play. They joined in on the Mario theme sing-a-long and almost made it through the whole concert before falling asleep.

Here is the tour schedule for Video Games Live.

Uncle Chestnut’s Table Gype Lives Up to the Hype