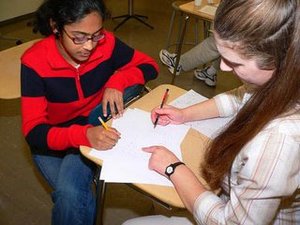 Following up on Vince’s post about how instilling confidence in young girls improves their interest in math, I’d like to mention some other important factors pointed out to me by a mother who’s raised two mathematically-talented daughters.

On Friday, The New York Times ran a story about the lack of U.S. girls in elite problem-solving competitions like the International Mathematical Olympiads. Mary O’Keeffe’s older daughter Alison Miller (who is now studying math at Cambridge) was one of only three high school girls to make it to the U.S. Olympiad team, along with Melanie Wood and Sherry Gong. But Mary says The Times story didn’t focus on the right elements:

The article misses so much of what was most important about the Math Olympiad experience, which is the sense of belonging to a mathematical community which Melanie, Alison, and Sherry all got out of their Olympiad experiences. There’s a researcher at SUNY, Abbe Herzig, who works on issues of math & women, and she has a slide show on her website emphasizing the need for women to get a sense of “belonging” in mathematics.

I know that Alison got an enormous sense of belonging out of her first math Olympiad summer training camp experience, and it literally transformed her life. Melanie Wood was a staff member at Alison’s first camp and I think she deserves an enormous amount of credit for her leadership in transforming the culture there. Alison has tried to “pay that forward” by mentoring younger students and helping to create mathematical communities they could enjoy. For Alison and Melanie, I think coaching and mentoring has been even more fun and rewarding than competing.

Many people know that Alison won a gold medal at the International Math Olympiad in Athens, Greece in August 2004. But few people know of something that makes me even prouder–Alison tied for “most welcoming vet” in a vote of the rookies at the 2004 training camp. 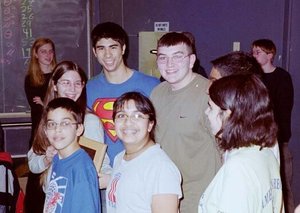 Even the Times’ choice of photographs to accompany the article reinforced a wrong-headed notion of what math is about, Mary feels.

The photos the NYT ran were awful. All three take great delight in doing math, especially doing math in a passionate community of kindred spirits. All three have lovely warm smiles. They have a great sense of “mathematical playfulness,” which is an essential quality in mathematics.

(The photos here show members of the Albany Area Math Circle; Alison is in the group at far right.)

For Mary, “playfulness” is developed by learning math through puzzles and games. As a preschooler, Alison read the Mathemagic volume of Childcraft Encyclopedia;

when she was 6, it was Marilyn Burns’ Math for Smarty Pants (obnoxious name but great book!); when she was 8 it was the beginning of a long love-affair with Martin
Gardner’s recreational math books and Douglas Hofstadter’s books (especially Godel, Escher, Bach –she first read that at age 8 and has re-read it many times since then.) When she was 9, she began reading professional journals in math, some of which made my eyes glaze over (and I was a math major in college!)

By the time Alison was 8, her folks decided it didn’t make sense to tell her to put away her calculus book to prepare for her multiplication test and pulled her out of school.

in China math is regarded as an essential skill that everyone should try to develop at some level. Parents in China, he said, view math as parents in the United States do baseball, hockey and soccer.

Dr. Feng says “Here everybody plays baseball,” Dr. Feng said. “Everybody throws a few balls, regardless of whether you’re good at it, or not. If you don’t play well, it’s O.K. Everybody gives you a few claps. But people don’t treat math that way.”

Can the U.S. school culture that values sports over math be changed? Or are outside communities of math circles, MathCounts teams and the like the best way to encourage kids who love math?