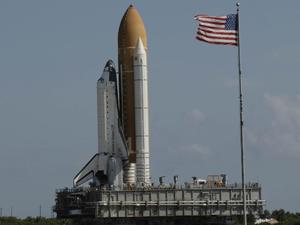 The launch schedule for remaining two Space Shuttle launches in 2008 has been changed. The adjustments took place once Tropical Storm Hanna had moved beyond the Kennedy Space Center. STS-125, Shuttle Atlantis’ mission to service the Hubble Space Telescope, is now planned for October 10, 2008. Shuttle Endeavor’s STS-126 mission to resupply the International Space Station is now targeted for November 12. 2008.

Shuttle Atlantis completed it’s long, slow journey from the Vehicle Assembly Building to Launch Pad 39A on Thursday, and was secured to the pad at 3:52 p.m. EDT. Live coverage of this rare night launch will be broadcast on NASA Television, beginning  at 7:30 p.m. EDT on Thurs. Oct 9. The new launch time now slated for approx. 12:33 a.m. EDT on Oct. 10, 2008.

Shuttle Endeavor will be carrying a reusable logistics module to the International Space Station when it launches in November. It will hold supplies and equipment, including additional crew quarters, a second treadmill, equipment for the regenerative life support system and spare hardware. Barring complications, the STS-126 mission is scheduled to last 15 days. It will be the 27th Shuttle mission to the ISS.

Join the Treasure Hunt on the Island of Thieves

Geeking Out Over Astoria