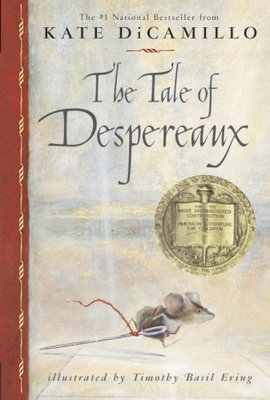 Despereaux Tilling is born different from all the other castle mice: He’s tiny in stature, but his ears are embarrassingly huge.  And he only gets more different from there: He is utterly disinterested in performing his expected duties of nibbling paper and scurrying for food; he would much rather listen to music (his enormous ears give him excellent hearing) or read books (he learns to read instantaneously, almost magically).  When he simultaneously reveals to a human that he can speak and, far worse, falls in love with Princess Pea, the (human) daughter of the king whose castle they live in, the castle’s mouse community summarily exiles Despereaux to the castle’s labyrinthine dungeon for his unmouselike behavior.

Meanwhile, in the depths of the dungeon, Roscuro (short for "Chiaroscuro") the rat is planning to kidnap Princess Pea and lock her in the dungeon, as an act of revenge against her and, especially, her father the king (for the king has outlawed soup—yes, soup—which Roscuro craves). When Miggery Sow, a young, not very bright girl, shows up in the dungeon to bring the jailer his food, Roscuro sees the patsy he needs.  He convinces her that she can replace Princess Pea if she helps him kidnap her, and she goes along with the plan despite her better nature.  Meanwhile, Desperaux escapes the dungeon with the aid of the jailer, and, having overheard the plan to kidnap the princess he loves, sets off sword-in-paw to rescue her, getting his tail cut off along the way (which makes the book’s title into a great little pun).

There’s a great deal more to The Tale of Despereaux

, including Roscuro’s change of heart, but you will surely enjoy reading Ms. DiCamillo‘s words far more than this post. The characters are richly described—even the secondary ones—and the narration is humorously friendly, often addressing the reader directly. It reads like an old-fashioned fairy tale story, with several major twists (which if revealed might spoil the ending). It’s an excellent book for kids and adults: you’ll all be cheering for Despereaux, I promise you.

If this story sounds somewhat familiar to you even though you’ve not read the book, you’ve probably seen a trailer for the upcoming movie based on the book, which is scheduled to be released just before Christmas of this year. The movie has some brilliant voice actors, has some other talented folks associated with it, and has trailers that look terrific, so I have high hopes for it.  But you’ve got plenty of time to read the book with your kids (or by yourself, if you’d rather) before the movie comes out.  I highly recommend you do so.

100 Years and a Day Later, a Lego Titanic Model

Aion MMO Is More Than WoW With Wings