I had a great time at iPhoneDevCamp 2 in San Francisco last weekend. I’ve posted some general notes from the camp over at Webmonkey, but here are some thoughts I had with my GeekDad hat* on:

Lots of geekdads and their kids were in attendance. Joe Michels got an iPhone so he could show off photos of his kids, but now he’s writing apps. Carlos McEvilly (pictured) wrote code while his daughter Annika playtested games for other developers. Ray Valdes and his kids worked together on a mermaid game, while Camp organizer Dom Sagolla’s infant son Leo offered to judge the Tastiest App award.

And the apps? I’m biased, but Fwerps is so awesome! A fwerp is a virtual pet–think tamagotchi tribble without the trademark infringement. The idea came from LC Boros, who also served as art director and "fwerp herder". We wanted to make something that was unique to the Touch platform, so we concentrated on the accelerometer (rocking it to sleep), touch gestures (petting), sound/vibration (purring), and network (reproducing). Our "code gopher" Matt Paul hunted down utility code, and I put the pieces together in Xcode.  It took round-the-clock coding and a lot of help from other developers, but we got something that worked well and didn’t crash during the demo! (Video of the demo is already online.)

I posted more photos in the Flickr GeekDad group. More app reviews after the jump.

Folks at the Austin satellite camp submitted a similar app called
Hurls. If you shake the little animated character around, he gets dizzier and dizzier until he, er,  hurls. Eeew! (It’ll sell millions.) 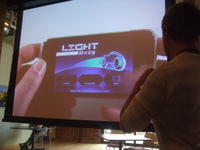 LightBikes, a racing game based on the cycles from Tron, was shown in an early state, but it already looks cool. The controls are still being worked out, but they’ll probably involve tilting the phone to steer. A free 1-player version is expected to come out first, followed by a for-pay multiplayer version later on.

Two new apps really knocked my socks off. Neither one is really a game, but I can imagine playing with both of them for hours on end.
WildCard is a free-form gaming surface that allows the player to place cards, pieces, and chess boards wherever they want. The surface can be synced with other phones over the network, which makes it a virtual multiplayer gaming table. Best yet, no game logic is applied;
you could play any game you have the pieces for.

Harp is just simply amazing. It’s a musical instrument that takes full advantage of the Touch platform. You choose chords with one hand, then strum the exposed "strings" with the other. It manages to be really flexible (minor chords with a flick of the thumb) and foolproof (the exposed strings sound great together no matter what) at the same time.
I can’t wait to see it in the App Store.

Bonus geekout: I met Ian Morris Nieves, who worked on Lego’s Digital
Designer software–he showed me some of the first test renders–and now designs iPhone apps. Are the two related? Perhaps. Maybe we’ll find out before the next iPhoneDevCamp.

* not an actual hat

Hydra Cable: Is the “Six Headed Monster of MP3 Cables” Worth the Price?