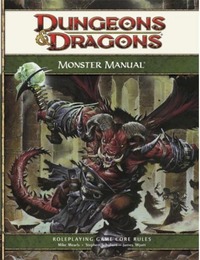 In the second installment of my D&D 4th Edition review, I’m investigating the new Monster Manual. As one of the core three books, the MM is very likely to be one of the books D&D players — in particular Dungeon Masters — are obligated to buy if they want to play 4E. Read on, and hopefully all your questions will be answered.

This new book is a beautiful reference with all-new illustrations. At 288 pages, it seemed a little leaner than 3.5′s 320 but I didn’t feel like a lot of stuff was left out.

In its most basic form, the new Manual resembles its predecessors. It has critters with descriptions and pictures. But beyond mere stat updates, there are numerous changes. The most noticeable of the changes is that every monster fights as a group. Even dragons have a crew backing them up. It is the rare monster indeed that doesn’t have at least one or two companion critters. For exmaple, take the classic gargoyle. Now the typical 9th level encounter group includes 3 gargoyles, a gibbering mouther, and a galeb duhr.

Another big change is that now, most monsters have different types. For instance, the ogre is divided into ogre thugs, bludgeoneers, savages, skirmishers and warhulks. Salamander are lancers, firetails, archers and nobles. every monster is classified as either a Skirmisher, Brute, Soldier, Lurker, Controller or Artillery, giving them certain bonuses at different levels.

Elementals have merged with one another, now instead of air, earth, fire and water there is the Fireslasher (air meets fire), Rockfire Dreadnought (earth and fire), Earthwind Ravager (air, earth), and Thunderblast Cyclones(air and water). This change isn’t as arbitrary as it might seem at first glance: in the new 4E cosmology, the elemental planes have been merged into the Elemental Chaos, a place where all the elements reside in continual turmoil. It makes sense that the elementals would reflect this anarchy.

Generally, I found the mix of beasties to me remarkably similar to that of the 3.5 MM. For both books I felt there were too much of an emphasis on absurdly powerful enemies like demons and devils with too few ordinary monsters you encounter while adventuring. They had Orcus and a terrasque, both clocking in at over 1,500 hit points(!) — when you factor in all the ancient chromatic dragons, that’s a lot of monsters with over a thousand hit points!

Which brings up the inevitable truth that when PCs start with 20+ hit points, with all the skills and powers available even to low-level PCs, monsters have to be tougher too. Gnolls start at 50hp.  In the Keep on the Shadowfell module, a goblin chieftain encountered has over 100 hit points! As a point of reference, the original red dragon had only 88 hp. One bizarre contradiction are the 1-hp monsters. That’s right, baby — ONE HIT POINT. Typically these are swarm monsters like kobold stooges and goblin cannon fodder. Basically, any hit kills them. I suppose giving them 1-6 hit points wouldn’t change much.

Only one final change I want to cover is a dearth of "good" monsters in the book. As mentioned in Wizards’ sneak peeks, they were focusing on evil monsters rather than benign ones. So no blink dogs or metallic dragons in this resource, and storm giants are evil.

It’s hard to wrap my mind around all the changes. As I mentioned in Part One, the changes to the game system are as profound as any D&D edition has ever experienced. The changes the monsters in the 4E have undergone make them more heroic and larger than life, I think. No longer is the toughest kobold weaker than even the most neophyte adventurer. The most powerful of monsters could destroy whole parties of elite PCs. There may be a hint of power inflation going on, but for the most part it makes gameplay more exciting.

Next week I will offer my take on the Dungeon Master’s Guide. Also, if you haven’t read it yet, check out my review of the Player’s Handbook in Part One.

Hex Bugs, Crawling on a Floor Near You