We’ve been trying to get our kids to ride their bikes for about a year and a half. It hasn’t been a constant battle — we would try for a bit, then take a month off. Rinse. Repeat.  It’s been tough, but that’s what makes today so rewarding. Today, we have success. All three kids riding: spinning around the driveway, hair waving in the wind, ear-to-ear smiles on their faces. Life is good.

Last year, Geekdad Dan Olson took a look at how to encourage kids to ride bikes. Dan made a lot of great points addressing the psychological aspects of motivating kids to ride. Today, I’m going to evaluate a variety of physical methods for getting kids on two wheels. 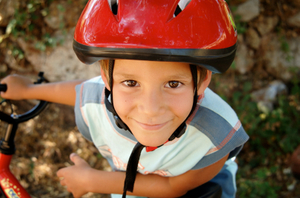 Like many parents, we had our children riding tricycles at an early age. This gave them two necessary skills that would carry over to bike riding: pedaling and steering. These very early experiences paid off too. When the time came for a bike with training wheels, they weren’t afraid and understood what they were supposed to do.

In researching this post, I was amazed to find that quite a few people feel very strongly that training wheels on a child’s bike are an unadulterated evil on par with letting kids play with loaded automatic weapons in the middle of a highway during rush hour.

We don’t subscribe to this school of thought. Rather, we believe that just getting the child on the bike is the most important thing. Our kids aren’t going to be commuting to school on bikes anytime soon. So bicycles – for them – are a tool for exercise and fun. And as long as they were riding around outside instead of lounging around watching Spongebob, we were happy.

When it came time to ditch the training wheels, I did some research on the best practices for getting kids rolling on two wheels. I was surprised at the variety of methodologies people had for getting kids to ride by themselves. Here are seven of the most popular ways, plus a rating on how each works:

Take off just one of the training wheels. This seemed ridiculous to me.
You might as well ask yourself "Which side of your kid do you want to scrape with a cheese grater?" Because in my mind, the kid is just going to fall down and scrape up one side over and over and over again. We tried this method for about five minutes, generating the results I expected. Rating: Tired.

Start with an undersized bike. Go into any bike store and you’ll learn that a well-fit bike allows its rider to straddle the top tube while standing flat footed on the ground. With this variation, the child should be able to stand flat footed while sitting on the seat. It makes him feel more in control. By waiting as long as we did to get our kids to ride, this process became part of our routine by default. In the end, I think it was helpful and made them feel more in control of their bikes. Rating: Wired.

Put away the bike and use a scooter. This suggestion recommends giving the child a 2-wheeled scooter and encouraging her to play with it. Once she is able to coast around with both feet on the scooter, she will feel more comfortable coasting around on a bike. Because the scooter has a lower center of gravity and an easier bailout procedure, the child is apt to feel more comfortable. We didn’t try this because I didn’t want to buy a bunch of scooters. Plus, the kids would be learning how to ride a scooter … not a bike. Rating: Tired.

Take the pedals off. I found this suggestion in one of the comments to
Dan’s article. It seemed pretty smart to me – let the child coast around on his bike without the hinderance of pedals. We gave it a try, but I think my kids were still too small when we experimented with it and just not ready. I think the idea has merit, it’s easy to implement and I’m pretty sure it would be a good part of anyone’s routine in making kids comfortable with bike balance. Rating: Wired.

Hill training: Find a grassy spot with a small hill, not too many ruts or rocks, that includes a flat area before ending in a slight incline.
Kids will be able to get the feeling of coasting before running up the slight incline and slowing down. This suggestion comes with too many geographical requirements. I guess my wife might be open to playing the part of Sacagawea, but I didn’t feel like reconnoitering the land, school after school, park after park, trying to find a spot that met the all the requirements in this suggestion. Instead, we tried our backyard and came to a quick conclusion: Unless you live off the 13th at Augusta, yards tend to be too bumpy, making the focus on balance all-consuming.
The ideas of steering and pedaling are thrown out the window pretty quickly. Kids like it because falling on grass isn’t as bad as asphalt, but we gave this one up in a hurry. Rating: Tired. 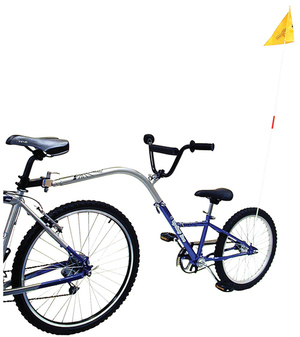 Trailer bike. These bikes lack a front wheel and attach to the seat post of an adult bike. For us, this was a breakthrough. I picked one up this summer and – for my kids – the combination of not having to steer and just focusing on the pedaling led to exhilaration. They. Were.
Riding! It lit a fire under them and they immediately began practicing on their own. I also suspect that – because the bike is attached to the adult bike – they felt some of the subtle adjustments I made to keep the bike stable … especially at low speeds. Rating: Wired.

Running with the child on the driveway. The most simple is saved for last because, in the end, this is what worked in our situation. Like an untold number of parents before us, I ran after the bikes – encouraging my kids and shouting out pointers: Keep pedaling! Don’t look down –
look ahead! With this method, it helps to give the child some balance support to keep them from falling in the beginning. Some advocate holding the child by the neck (!), some say by the shoulders. There’s even a company that makes a product for this method, but I think they’ve just repurposed inventory left over from the incredibly misguided fad of dwarf throwing. I opted for holding the bike steady from beneath the seat. I was able to help them with their balance and – when I felt they were ready – I let them go without them knowing that they were on their own. Rating: Wired.

Learning to ride a bike is one of the toughest skills a child will learn. And the challenge for a kid who is still figuring out how to control his or her body is daunting. Coordinating balance, pedaling, turning and stopping is a tall order for children who have a tough time doing just 2 things at once.

But we got through it. And if you’re struggling to get a child to ride, you will too. Strap on the helmet, tuck the shoelaces away and pick a method and see how it works. Most of all, be patient. We dealt with a lot of frustration on our final day, before they really got it.

The only rule we had any day that we practiced was that you can’t end your day on a fall. If they went down, they had to get back up and try again. Sure, we went through a couple of boxes of Band Aids during this ordeal, but skinned knees heal. The sense of accomplishment will last forever.