This is alternatively titled "What I Did For My Summer Vacation" or (in keeping with this month’s GeekDad theme…) "Bad Dad: Leaving the GeekMom and kids While Jetting off to Africa."  I found a fascinating country filled with warm, friendly people and beautiful natural scenery.

Why did I go?  To help out a school there that my church has supported for many years.  They are slowly growing their computer use, so I went to help physically where I could, and came to observe to help with suggestions in the future.  I had no idea what to expect, so I brought a fair amount of gadgets: 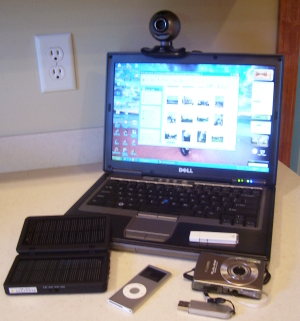 The gadgets include my laptop with webcam, two USB flash drives (one running PortableApps), a digital camera, my iPod (for the long flights), and a solar-powered USB charger with an LED flashlight.

The solar-charger with flashlight was a life-saver – especially at night when the power was out.  The electrical power was on only a handful of (non-consecutive) hours each day.  The school ran a generator during class-time and for a couple hours at night so the students could study.  Unless NEPA – the Nigerian Electrical Power Authority (also called No Electrical Power Anytime) – supplied power outside of those hours, the school did not have electricity.  Even while in the nation’s capital at the international airport, the power went out twice in a four hours.

My first task was the replacement of the mother-board on the computer that enabled their internet connection via satellite.  Other tasks included helping re-install the OS and applications on a few of the school’s computers. I also helped with personal systems to get NICs re-installed or de-bugging iTunes (I was much more productive on the former than the latter).  We then talked about future plans for the computers on campus.

Like many places around the world, the students are overtaking faculty and staff with their technical knowledge and use of technology in school.  The tough part is the cost of internet service right now.  The school shares a satellite link with at least twenty-nine other groups/businesses…the net effect is a slower-than-dialup speed. For multiple computers. Yet a dedicated satellite connection would run a few thousand US dollars – per month!

Laptops are a big business in Nigeria because of the unpredictable power.  If you’re running electronics, the gear to protect them is also necessary – things like UPS and voltage stabilizers.

It was a busy week, but we also got some time for sightseeing and shopping in Nigerian markets – here’s my Flickr set for the trip. 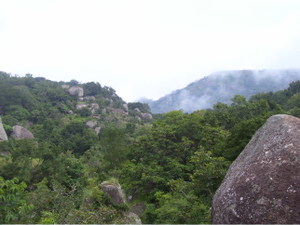 It’s a beautiful country with lots of different landscapes only a few hours from where we stayed.  English is the trade language (from their days as a British colony), and Hausa is a tribal language (thanks commenters for setting me straight).  Nigerian culture is one where you greet nearly everyone you see – so a two-minute walk from the house to the school library could take ten or fifteen minutes depending on how many people you passed.

My time went very fast, and I want to go back in the future.  The smiling faces, the greetings and laughter, and the untouched wilderness are in many ways very addicting.

A Family Visit to the Cincinnati Museum Center at Union Terminal

A GeekDad Guide to Ottawa: Paliament, Museum of Civilization, Beavertails, and a Giant Spider