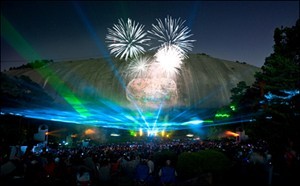 In the suburbs of Atlanta, there is a natural wonder with a storied history and a very unique ecosystem. Stone Mountain is a granite dome monadnock with rocky roots reaching out to several surrounding Georgia counties. It’s quite a sight to behold: a huge blank slate of granite, visible for miles around, which makes it perfect for what has made it famous in the surrounding areas: the Stone Mountain Bas-Relief and the Lasershow Spectacular.

The surrounding state park is full of walking trails and a quaint southern village reproduction, but the real draw is the mountain. It has been for hundreds of years, but in 1912, C. Helen Plane decided that the north face of the mountain would make a great canvas for a Civil War monument. She and the United Daughters of the Confederacy were given the north face by the owners of the mountain. They hired Gutzon Borglum to create an enormous bas-relief depicting famous figures from the War. After nearly a decade of work, Borglum had completed the head of General Robert E. Lee, but a dispute with the UDC led to him departing with his sketches and models. He went on to carve Mount Rushmore. 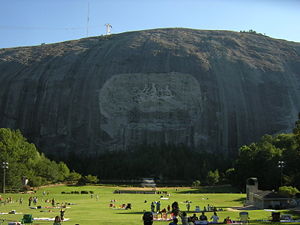 Even after a second sculptor, Augustus Lukeman, took up the mantle, the work remained incomplete for nearly four decades. In the 1950′s, the state of Georgia purchased the land and held a competition to choose a new sculptor. Walter Kirkland Hancock was selected and began work on the bas-relief. With new thermo-jet sculpting techniques, Hancock and his team were able to create a more detailed rendition of the three Confederate War figures: Jefferson Davis, Lee, and Thomas J. "Stonewall" Jackson.

Despite Stone Mountain’s storied past (it was used as a meeting place for Atlanta-area Ku Klux Klan members), it’s currently the centerpiece of a very well-maintained and enjoyable family-themed park. Hiking trails, including a walk-up trail that takes visitors up to the peak of Stone Mountain, criss-cross the area. Cable cars run past the bas-relief and up to the top. Locomotives move throughout the park and a riverboat chugs through the nearby Stone Mountain Lake.

During the summer, though, the main draw is the Lasershow Spectacular. For twenty-five years, rain or shine, lights have been projected onto the granite surface of the mountain while a soundtrack is pumped in from gigantic surround-sound speakers.

Is the Lasershow cheesy? Yes. Any show that mixes perennial classics like "An American Trilogy" with songs from High School Musical can’t be taken too seriously. Is it a sight to behold? Absolutely. The lasers and fireworks (yes, there are fireworks) are choreographed so perfectly, the "Flame Cannon" and "Laser Canopy" effects are so unique, that geeklets will be wondering, "How’d they do that?" on the ride home.

For a preview, check out the Stone Mountain Lasershow Spectacular website.