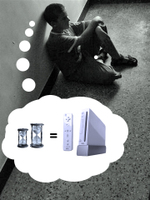 Thanks to all who responded with answers and comments to our first weekly puzzle. I’m glad to see that lots of folks swing when the ball is lobbed. This week’s glory goes to Steven Feinstein of Massachusetts who was the first to email the correct solution.

The Puzzle:
Your son (or daughter if you will) has been caught overplaying his Wii past the allowable time. Your punishment, designed to build character as well as future gaming skills (because, you know, you’re not  capricious) has him put in an empty, windowless room devoid of any and all technology save for two, old-fashioned hourglass-type egg timers that precisely measure seven and four minutes respectively. You tell him that he is not allowed to come out and must stay in the room for exactly nine minutes. If he comes out over- or under-time, he is denied the Wii for the rest of the month. Your son is not wearing a watch or other piece of timekeeping device primitive or modern, but he is a clever and determined gamer and emerges on the nose in nine minutes. How did he do it?

Help They Might Be Giants With Their Next Video