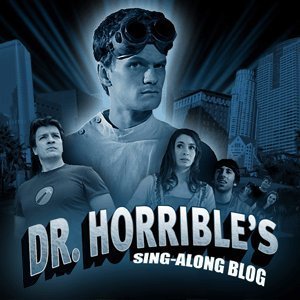 The third and final Act of Doctor Horrible’s Sing-Along Blog goes posty today. All three acts can be seen at drhorrible.com until Midnight on Sunday, July 20th. After that, they can be only found (legally, anyway) in the Televsion Section of the iTunes Store for $1.99 per episode, or $3.99 for the Seasons Pass.

Doctor Horrible was created during the Hollywood Writer’s Strike by Joss Whedon, his brother Zack, his half-brother Jed, and actress Maurissa Tancharoen. The reason it was created is best described by Joss in the Master Plan he posted on the Interwebs:

Once upon a time, all the writers in the forest got very mad with the Forest Kings and declared a work-stoppage. The forest creatures were all sad; the mushrooms did not dance, the elderberries gave no juice for the festival wines, and the Teamsters were kinda pissed. (They were very polite about it, though.) During this work-stoppage, many writers tried to form partnerships for outside funding to create new work that circumvented the Forest King system.

Frustrated with the lack of movement on that front, I finally decided to do something very ambitious, very exciting, very mid-life-crisisy. Aided only by everyone I had worked with, was related to or had ever met, I single-handedly created this unique little epic. A supervillain musical, of which, as we all know, there are far too few.

Whedon put up the money to create this project himself. He is expected to announce at Comic Con details on the release of a full-length Doctor Horrible DVD, which will purportedly contain lots of extras, including a rumored sing-along commentary track. He is hoping to pay the cast and crew from the proceeds of iTunes and DVD sales.

The idea was to make it on the fly, on the cheap – but to make it. To turn out a really thrilling, professionalish piece of entertainment specifically for the internet. To show how much could be done with very little. To show the world there is another way. To give the public (and in particular you guys) something for all your support and patience. And to make a lot of silly jokes. Actually, that sentence probably should have come first.