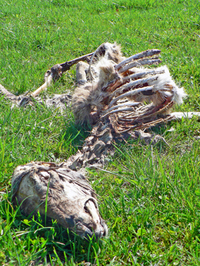 One of the many pleasures of being a GeekDad in semi-rural New Jersey is taking the offspring out on nature hikes. There is a treasure trove of discoveries to be had, but one recently has us discussing the philosophies and biologies of animal death.

We recently came upon the picked-clean carcass of one of the many whitetail deer that fall victim to their primary predator out here: the automobile. I watched the turkey buzzards collect in one spot off the road near one of our local haunts for some time before venturing out to take a look. Sure enough, there was the complete skeleton. Many buzzards grew fat. The 5-year-old’s excitement when I suggested we take the skull home and clean it for his collection eventually turned to remorse, a discussion of the cycle of life, and then back to excitement again. This pattern repeated randomly as we went through the cleaning process, which takes a bit of time, but is worth the work for any geekdad/kid team with strong constitutions. (Hit the jump for the blow-by-blow.)

Anyway, I now had a decayed deer skull to clean. Nature did a good piece of the initial work, but there was still a lot of finishing up to do. Kevin Kelly’s most excellent post on rebuilding a chicken skeleton inspired me, but his method using Draino and boiling and bleach seemed a little rough for something this large. Plus, boiling something you can then eat is one thing. Boiling something that has been sitting in a field for weeks is [cough] quite another.

The several small animal skulls I’ve collected over the years have always been taken care of by nature in some way. I’ve buried the skull or left it outdoors somewhere undisturbed, which always gives you the best results – and teaches patience. Boiling animal bones causes them to absorb grease and discolors the bone. Bleach breaks down the bone making the whole thing just plain disgusting. Other larger skulls in my cabinet of curiosities have been cleaned by various taxidermists who’ve used Dermestid beetles to completely denude the animal bone. (If you ever get a chance to see this in action, I recommend it!)

I decided for this specimen to use old-fashioned, no nonsense maceration – which is essentially letting bacteria do their job.

First, we buried the skull in our compost heap for a week or so to let nature finish off any remaining tissue. We (well, I)  then cleaned off the remaining bits of hide and fur from the skull and submerged it in a covered bucket of hot water with about 1 cup of eco-friendly laundry detergent with enzymes. (You can skip the detergent, but be prepared for the smell!) After two days, we changing the water, then let it sit for two more days, then changed the water again. (You can dump the water right into your compost pile or garden.) The idea was to stop when the water is fairly clear. This whole process took care of the remaining tissue in various nooks and crannies.

The next step involved cleaning off the bits of tendon and fat that remained on bone. This turned out to be tricky. There were also stubborn bits inside the skull cavity. This is not for the squeamish.
The skull parts were then left to dry in the sun. Anything we couldn’t get at dried up and was easily scraped off.

The skull parts were then covered in normal, drug store hydrogen peroxide for three days. The skull was already very clean and whitish, so this only took a short while. A more browned, stained bone might take a bit longer, but watch it closely. This process bleached the bones and disinfected too. The skull was left in the sun once more for a good drying. To our surprise, none of the teeth fell out, which is typical in this process. We then brushed on a light coat of diluted
Modge Podge to seal. Voila! I should mention that we wore latex gloves up until the final disinfecting stage – better safe than sorry! 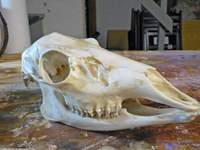 We’ve been having a good time comparing this skull with the others
I have on hand – particularly herbivore vs. carnivore – as well as talking more about well, death in the natural world. The process we used to clean this skull was no different than what would have happened in the field where we found it. The deer’s body became food for a host of creatures big and small. I’m still pretty amazed how quickly the offspring got over their initial revulsion. (They grasped the whole process better than their mom, thatsfersher.) It is amazing how small kids can understand big ideas about the natural world when you give them the chance and face them with some real examples. Obvious maybe, but something missing from modern schooling in my opinion.