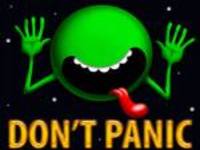 Fans of the late Douglas Adams pay tribute to him each year by celebrating Towel Day on May 25th. (This date is also Nerd Pride Day but these two events are completely unrelated.) The annual Towel Day tradition was started two weeks after the author’s death in 2001, and has become somewhat of a worldwide event. Participants are urged to carry a towel with them all day long, and perhaps stop to pose for cameras with your thumb in the air.

But what if you don’t own a proper towel? What if you prefer to drip-dry? Maybe you live in a wind tunnel and have no need for an absorbent piece of cloth.

Well the folks at ThinkGeek are now offering this beautiful 42 Utility Towel. Constructed from black velour, "it is based on the award-winning design of the Anti-Flatulent Fighting Towels of Flogulon Beta." The number 42 is emblazoned on the front of the towel, but the manufacturer is not sure why. It measures 16" x 25" and costs $12.99 each. 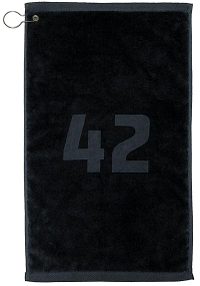 Why a towel, you ask? Well, to quote from the Hitchhiker’s Guide to the Galaxy:

A towel, it says, is about the most massively useful thing an interstellar hitch hiker can have. Partly it has great practical value – you can wrap it around you for warmth as you bound across the cold moons of Jaglan Beta; you can lie on it on the brilliant marble-sanded beaches of Santraginus V, inhaling the heady sea vapours; you can sleep under it beneath the stars which shine so redly on the desert world of Kakrafoon; use it to sail a mini raft down the slow heavy river Moth; wet it for use in hand-to-hand-combat; wrap it round your head to ward off noxious fumes or to avoid the gaze of the Ravenous Bugblatter Beast of Traal (a mindboggingly stupid animal, it assumes that if you can’t see it, it can’t see you – daft as a bush, but very, very ravenous); you can wave your towel in emergencies as a distress signal, and of course dry yourself off with it if it still seems to be clean enough.

More importantly, a towel has immense psychological value. For some reason, if a strag (strag: non-hitch hiker) discovers that a hitch hiker has his towel with him, he will automatically assume that he is also in possession of a toothbrush, face flannel, soap, tin of biscuits, flask, compass, map, ball of string, gnat spray, wet weather gear, space suit etc., etc. Furthermore, the strag will then happily lend the hitch hiker any of these or a dozen other items that the hitch hiker might accidentally have "lost". What the strag will think is that any man who can hitch the length and breadth of the galaxy, rough it, slum it, struggle against terrible odds, win through, and still knows where his towel is is clearly a man to be reckoned with.

So, show your support. Let your geek flag… uh, towel… fly. Have a Pan-Galactic Gargle Blaster. It is an easy way to celebrate and is much less disturbing than putting Babel Fish in your ear.

So Long Douglas, and Thanks for All the Fish!