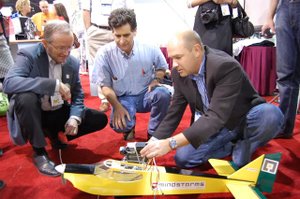 This was my first year at the FIRST Robotics Championships, and I was blown away. More than 20,000 kids and coaches from 1,500 teams from around the world came to Atlanta to compete in the Georgia Dome. They brought more than a 1,000 robots and a dizzying array of team costumes, mascots and pit crews. Imagine a cross between the NCAA basketball championships, the Daytona 500 and the Westinghouse Science Fair, all in a huge arena that’s was the site of an Olympics and running for three days of frenetic competition. Mind-blowing and incredibly inspiring.

I was there at the LEGO booth demoing my new Mindstorms UAV, which was getting a good bit of attention even with so many competing robots around me (aside from our blimps, which we only showed off in private, it was the only flying robot there). The above is my favorite moment, when Kjeld Kirk Kristiansen, the deputy chairman of LEGO (and the reigning member of the family that started it) and Dean Kamen, the founder of FIRST (and the inventor of the Segway), came by for a demo. I told them that the idea came to me when I was looking to do something that had never been done with Mindstorms before. It’s a tribute to the creativity of the Mindstorms community that this required leaving the ground! Next stop (for someone else): space 😉

This picture comes from a great photo gallery of shots from the competition that Lego’s Maureen Reilly took.

The hardware I used for the Mindstorms UAV was a prototype of the LEGO Mindstorms NXT-based gear that will be in the new FIRST Tech Challenge competition kit next year, replacing the VEX robotics kit that has been used to date. This has been very controversial, not least because of the investment in time and money people have made in VEX. But it’s clearly the right way to ensure that the competition continues to move with the times (adding a
32 bit processor, bluetooth and a suite of powerful sensors).

The old VEX kits were designed mostly for remote control
("teleoperated") bots, while the new Mindstorms-based ones are more better suited for autonomous bots.
To my mind, if it’s not autonomous, it’s not really a robot, so this move is welcome and perhaps even overdue. But autonomous robotics is harder and the Mindstorms-based platform (the regular NXT controller but with aluminum parts and servos and motors to make larger, more capable bots) is still new, so in the limited trials I saw people were still struggling to get the bots to complete the challenges. I suspect that LEGO will tweak the kit by adding some more powerful motors and a slightly less difficult course to ensure that next year’s proper launch is a success. But for the rest of us, the introduction of servos, motors and the rest of the real robotics world to Mindstorms is a huge gift. You ain’t seen nothing yet!