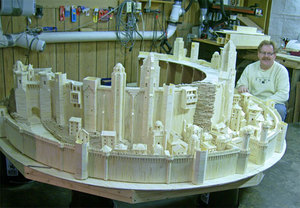 Patrick Acton is an artist from Iowa who uses wooden matchsticks to create his incredible works of art. His works has been featured on ABC’s Extreme,
Makeouver, Home Edition, Home and Garden TV as well as magazines such as Highlights for Children, Reminisce, AAA Travel Wood, The Iowan and others. This is one of his upcoming project which is to be completed by
2009 where a model of Minas Tirith from Lord of the Rings will be built.

Just an amazing project.  Just never let anyone like Abbot & Costello, or Mr. Bean near it.  I think we all know what could happen.

Link to the original story at Hemmy.net.