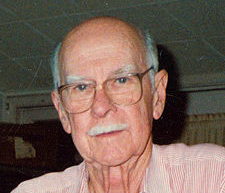 Ollie Johnston, the last of the "Nine Old Men" of classic Disney Animators, passed away on Wednesday.  Ollie started working with Disney doing in-between work on their animated shorts in 1935, and progressed along with the other eight into their now classic feature films.  You can either check out his credit list at imdb.com, or you can just walk over to your shelf and look at every single Disney feature-length animated film you have that was produced before "The Little Mermaid".  He worked on all of them.

Director Brad Bird (The Incredibles, Ratatouille) has a great tribute to Ollie Johnston on Cartoon Brew.

For those of you following the GeekDad Podcast, if you listened to Episode 8: Psychedelic Bunnies, you would have heard me tell my Bambi anecdote: several friends of mine, over the years, have told me that when they saw Bambi as a kid and they saw the scene with Bambi’s mother and the hunter that they were the only kid in the entire theater who understood that Bambi’s mother was killed by the hunter.  Can you guess the man who animated that scene?  Yes, it was Ollie (he was also the lead animator for Thumper).  I say this not out of vengeance, but of gratitude.  For every one of my friends who told me of the heartbreak they felt at the hunter scene in Bambi, not one speaks as if they wished it had never happened, but rather of the newfound awareness that the scene taught them.

Mr. Johnston, on behalf of myself and my friends, let me say thanks, for allowing us to grow up — and still watch cartoons.

Pern: The First World I Wanted to Be Real

Everything I Know About Parenting I Learned from Harry Potter