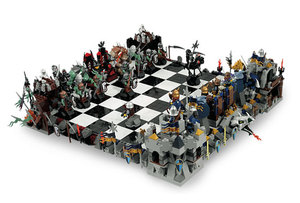 There has always been a sub-genre of LEGO sets that were chess boards, but in general they were always… just okay.  Coming July 1, that changes:

There’s never been a chess set like this one before! Now you can build the biggest and best LEGO chess board of all time, covered in incredible
LEGO Castle details and complete with a dungeon, armory, and decorative dragon heads…and that’s just the board itself! Pieces include king, queen, good and evil wizards, witch, knights, dwarves, trolls, skeleton warriors and horses, castle turrets, rolling siege towers, and more.

Now that’s a chess set that might actually get my kids into the game.  Or else it’ll be an all-out play-battle with the rules thrown to the wind.  Either way, everyone wins!

Link to the LEGO Ultimate Chess set (not available for purchase yet).

A Google-a-Day Puzzle for Tuesday, May 24th