The final stage of the Pup’s assimilation has commenced.  I have begun exposing her to the geek-classic, the original Star Trek television series.  Soon, she will speak Klingon, perform the Vulcan nerve pinch, and cause people’s heads to explode with logical arguments.  Mwa ha ha ha ha haaa….

(Somewhat) Seriously, Star Trek was not only a big part of my young life, but a big part of my self-identification as a geek.  That is to say, it helped me realize and accept my geek-self.  But that’s another article.  I promise.  This really started when the three of us were flipping through the channels and came upon a documentary about the Star Trek franchise.  The Pup asked us what was so great about Star Trek (she’s young, forgive her).  Mrs. Geek and I began to explain all of the things about Trek that we felt were worthwhile and still stood up to the sci-fi of today.  We soon found ourselves burying our poor unsuspecting child with all the ideas and feelings exposed to us, and inspired in us, about Star Trek.  Everything from our personal Geek-identification with the ultimate Geek-icon, Spock, to Nichelle Nichols’ story about meeting Martin Luther King Jr. and how he told her what a positive experience the show was for him because it allowed him to sit down with his children and see a show which displayed people of every color (and sometimes more than one) as equals.  It became clear to me that work had to be done to further indoctrinate our daughter into proper geek culture; into American culture.

More after the jump…

So, I went into the TiVO search menu and looked for a re-run series of the show.  I found about five channels currently re-running the show.  Say what you want about Gene Roddenberry, but I don’t think that even Aaron Spelling came that close to success in television.  I began accumulating episodes in the queue and sifted through them.  All due respect to the classic series, a lot of those episodes were fairly lame.  I see no need to expose my daughter to "Mudd’s Women", for instance.  But as I went over the episodes, one by one, I found myself saying "oh, that’s a classic" over and over again.  The list is quite lengthy, and is growing still.  So, what episode did I choose to first indoctrinate the Pup? 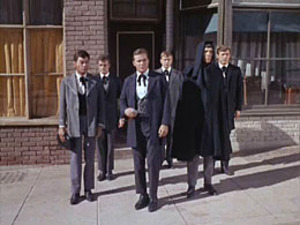 "Return of the Archons"

Not the obvious choice.  The back-story of this choice is that when the Pup was first placed with us, I had a little fun saying to her "These are strange words you speak, stranger.  Are you not of the body."  The next thing I know, Mrs. Geek is complaining to me that all the kids at school think our daughter’s weird because she keeps saying that to the other kids.  Well, I’ve got time to save up for the therapy bills.

Anyway, the episode was always a camp favorite of mine.  I’m a big zombie/body-snatchers fan, and this episode definitely had that element to it.  As I understand it, the base story that Roddenberry wrote for the episode is something of an in-joke for him.  The "Archons" was the name of the debating society that Roddenberry belonged to in college.  Anyhow, my Pup’s days of checking people for their loyalty to Landu were far enough in her past that she’d forgotten the catch-phrases.  Thus, there was no hook for her into the episode.  Without that hook the more complicated story-line was quite lost on her.

Red alert!  The child does not see the value of Star Trek!  Red alert!  Do not use this episode as a primer for your kids!  But fear not, fellow Trek—s!  All is not lost.  Tune in next time, and see what occurs with the second choice…

If You Like Fun & Quick Games, Look No Further Than Say Cheese And Dweebie