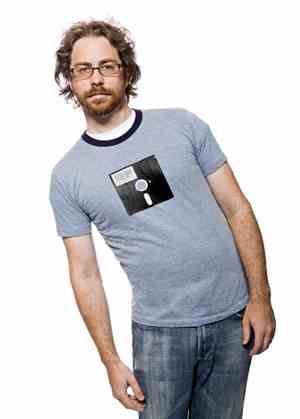 In the realm of nerdy music, few names pack so potent a punch as Jonathan Coulton. Yale alum, former software designer, Contributing Troubadour at Popular Science magazine, and sanctified GeekDad are but a handful of the startlingly studious credits to Jonathan’s name. This geek cred is contrasted against his continuing exposure via more mainstream avenues, from his award-winning musical essay delivered on The Daily Show -€“ as presented by John "PC" Hodgman, no less -€“ to his recent turn as songwriter-by-proxy for Portal as sinister supercomputer GLaDOS in that game’€™s waning moments.

Yet most know him less for his staggering credentials and more for his ingenious lyrics and skillful instrumentation. For many of us, Jonathan Coulton’€™s music is the soundtrack to our lives. With stories of unrequited love, memories of hard days spent in cubicles, and epic tales of science gone wrong, his music is our music. And with crossover success forever knocking on his door, Jonathan remains a fully-realized and self-described geek.

In truth, Jonathan Coulton is a Geek God, and from Olympus on high conceded to answer a few questions for GeekDad. Get the full skinny after the jump.

GeekDad: You released a song a week for a year via your "Thing a Week" podcast. Now that it’s done, how has your songwriting process changed?

Jonathan Coulton: If there’s one thing I learned about my songwriting process over the course of Thing a Week, it’s that every song I write goes through a long phase where I’m pretty sure it sucks. Even the good ones have this "sucky valley," and I’m now much better at recognizing when I’m there, and trusting that I’m going to pull out of it. This used to be the moment where I would give up, and heaven knows, sometimes that turns out to be the right decision. But most of the time it’s just a question of pushing through it and getting to the good stuff.

GeekDad: During the "Thing a Week" period, you covered a handful of songs by artists such as The Beatles, Queen, and, of course, Sir Mix-A-Lot. Why did you choose these specific artists?

Jonathan Coulton: I’m generally a fan of all of those artists, but it was really a question of finding songs that resonated with me. Long ago my wife pointed out to me that "Baby Got Back" is an excellent song, not just funny but kind of powerfully positive in its message. The Beatles are a huge part of my songwriting vocabulary, and "I Will" in particular is I think, one of the sweetest songs ever written (I’ve always been a sucker for McCartney). I covered "We Will Rock You" and "We Are the Champions" at the end of Thing a Week – it seemed an appropriately (i.e., inappropriately) grandiose thing to do. Plus it’s "we" who will rock you, and are the champions, and I was feeling so grateful to everyone who had listened and bought music and helped to make Thing a Week a success – finishing that year of songs felt like a victory for all of us.

Jonathan Coulton: Not yet. It’s hard for me to write directly about my current life – it feels too scary and personal. I’m sure that if I find myself in some way feeling like I’ve moved past this stage of my life, I’ll write lots of stuff about it. Most likely some kind of bitter "it’s hard to be famous" song, a genre that I find kind of annoying.

GeekDad: You recently performed "Still Alive" (closing theme of the videogame Portal) at San Francisco’s Great American Music Hall, on the video game Rock Band. Your back-up band was comprised of additional geek-celebs Leo LaPorte, Merlin Mann, and Veronica Belmont. As a foursome, if you were The Beatles, who would each member be, and why?

Jonathan Coulton: Well, based on the instruments, Leo would be Paul, I guess Veronica would be George, I’d be John, and Merlin would be Ringo. That doesn’t quite feel right though, especially considering that Veronica was the only one who kept us from bombing out of that song much earlier than we did. So I have to give the Ringo award to her for that one. And in that case, let’s say that Merlin is then both George and John, and I can be George Martin (please please please let me be George Martin).

GeekDad: If you could only be remembered for a single track from your catalog, which song would it be?

Jonathan Coulton: I’d have to go with something like "I Crush Everything," which is about a self-loathing giant squid who has exiled himself away from the world, because he loves boats and doesn’t want to destroy any more of them. I started out writing that one about a giant squid, but before I knew it I was writing about myself – it still feels very personal in a way I can’t quite figure out. And it’s sort of funny, but mostly it’s terribly sad, which is a constant goal for me.

GeekDad: Do you feel your success as a musician is indicative of a larger geek culture revolution?

Jonathan Coulton: I guess that’s part of it – there certainly has been a movement of niche-y things into the mainstream of late, and I think that the rise of geek culture is one way to look at it. But in a larger sense I think it’s about fandom in general, that kind of obsessive delight that people can take in the bits of culture they love. What’s changing now is that more and more people are directly involved in creating the content itself – all these memes that sweep across the world, and all these channels through which people can express their love of something by adding to it with their own creativity. I think that’s the real revolution that’s happening, it’s just that it’s happening for geeks first because they know how to use computers and the internet.

GeekDad: You’ve mentioned before that it was the birth of your daughter that motivated you to try your luck as a full-time musician. Do you feel you owe your current career to your daughter? If so, does her allowance reflect this notion?

Jonathan Coulton: Yes, she gets 6K a week. I’m not sure what she spends it on, that’s her business. When she turns three she’ll get 50K a week. But yes, I certainly do owe a lot to her, I’m very grateful for the clarity her arrival provided. And I hate to resort to the clichÃ©, but it’s true that having children changes your life forever in ways that you can’t appreciate unless you’ve been through it.

GeekDad: As a father, and the only bona fide geek troubadour with his own coloring and activity book, how much of your music do you feel is appropriate for children? Have you given any thought to creating music geared specifically toward children?

Jonathan Coulton: I think a lot of it is appropriate for children. Since I became a dad I’ve become a little more sensitive to some of the (ahem) adult themes and language in a few songs, and I’m not quite sure how I’m going to handle that when she gets a little older. I think a record of kids music would be a great deal of fun, and it’s certainly something I’ve considered – parents often tell me that their kid is obsessed with one or another of my songs, it would be fun to target that a little more directly.

GeekDad: How do you balance your family life with the rigors of touring?

Jonathan Coulton: I try to keep touring time to a minimum – it’s something I’m constantly experimenting with. I’m lucky enough to be able to draw large crowds in a few cities around the country, so it’s getting easier and easier for me to arrange short 3-4 day trips that are profitable. But the idea of riding around in a bus for weeks at a time is hard to imagine. As much fun as it is to travel around and stay in hotels and pretend to be a rock star, I really value my time at home with family and friends.

GeekDad: Your performance at last year’s Penny Arcade Expo was the stuff of legends. Are there any plans to return to the PAX stage? How about another geek-friendly venue, like the Maker Faire?

Jonathan Coulton: I’d love to come back to PAX, that was such an amazing experience for me – 5,000 zombies in a room together, it’s going to be very hard to beat. And when it comes to other stuff like it, I know that’s where my base is, and it’s where I’m likely to have the most fun playing. Mostly it’s become a question of scheduling and time and making my trips away from home as efficient and non-sucky as possible.

GeekDad: What new coolness can we expect from you in 2008?

Jonathan Coulton: Unknown. I write and record when I can, so you should expect a trickle of songs from me WHEN I FEEL LIKE IT. And I just shot a concert I did in San Francisco, that will hopefully be available as a concert DVD/live CD sometime later this year.

GeekDad: As an icon for GeekDads everywhere, what advice would you impart to the rest of this noble fraternity?

Jonathan Coulton: I have the luxury of being able to say this because things have worked out pretty well for me, and I’m very grateful for that, but I really think this is true: the best example you can set for your kids is to do what you love. People who grow up feeling like geeks soon become very practiced at hiding the parts of themselves that don’t fit in with the rest of the people around them, and that’s a terrible shame. I hope my kid loves math (or robots or elves or aliens), and I hope she doesn’t care who knows it.