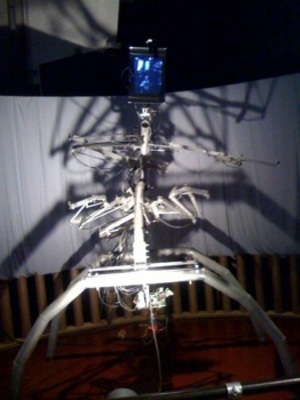 David Pescozitz over at Boing Boing posted this nice little tidbit about a new robot display at the Exploratorium in San Francisco:

This mechanical being is Master Mind, a fascinating robot built by Kal
Spelletich of San Francisco kinetic art group Seemen. Kal created
Master Mind as artist-in-residence at the Exploratorium: The Museum of
Science, Art, and Human Perception. When I took my two-year-old son to the Exploratorium, Master Mind was thronged by swarms of children
(including my son) who were entranced by its insectoid motions and monitor-head that displays the face of whomever is gazing directly at the robot’s mug. Master Mind reacts to the motions of those in its vicinity, but at its recent coming out party, it responded to people’s
"thoughts" as captured via EEG.

How Do You Help Your Kids Become Good Adults?