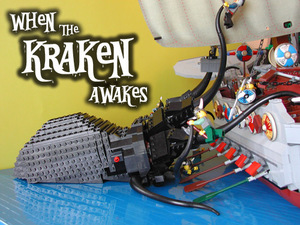 Another week, another awesome LEGO construct.  This time, Laughing Squid posts about "When the Kraken Awakes" – a really fun diorama project by one of the contributors at Fifth Conspiracy, a tremendous LEGO community site.  This was truly a GeekDad project, built over 8 months by a father and son team.

In an alternate netherworld dimension, the book of the dead ~ the necronomicon, has thrust Vikings, Centaurs, Dwarves and other creatures of horrid evil into battle as they relentlessly pursue strongholds of middle-earth. Shazam!!!

BrickFair Proves the Love of Lego Is Everywhere