The other week I mentioned the trouble
I had with the Wii Remote….just two days after Christmas.  This week I bring up the fun the family has had with the Wii version of
High
School Musical – Sing It! 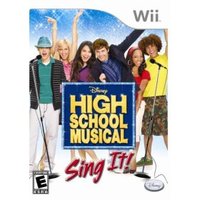 Prior to Christmas, we asked the kids what they thought of us getting them this game.  We suggested we could find it for the PS2 (instead of the Wii since they didn’t have it yet)….

There was a resounding
“Noooooo!” (with accompanying groans) from everyone not able to legally drive cars, vote in elections, or drink adult beverages.

After Christmas, however, the story has changed.  The GeekMom lost her voice playing this game one day….and with the exception of my oldest son, everyone in the family has tried at least one song.

The women in our house have been able to unlock several songs, new locations to sing, and new fashions for the characters they play during the game.  The GeekMom and our youngest daughter have discovered a “cooperative mode” (sorta/kinda GeekFamily hack) –
if they both sing into the microphone at the same time (in solo mode)
they get a better score on the songs out of their vocal range than if they sing individually in solo mode.

I’ll admit, the karaoke is fun.  The navigation menus are a bit less than intuitive, but once you figure them out you can move quickly through the options.

This one definitely needs a memory card so the things you unlock are not lost when the Wii is turned off.  Besides, I’m guessing your kids already know the words to most of the songs.

What I like is that it awards you for singing in pitch with very visual clues.  The better you do, the more that things happen on the screen (like people cheering and confetti falling from the ceiling).  The graphics aren’t spectacular, but it’s got (most of) my kids to try out singing in an encouraging manner.  They’re thrilled when they get an A+ on segments of the songs and earn a “rock star” status at the end of the song.

So, if you’ve got a Wii and some kids who like to sing (or maybe those that don’t yet know they like to sing), check this game out.

Happy Birthday to Wil Wheaton — You’re Still Prime to Us!

ThinkGeek Gets the Black Plague