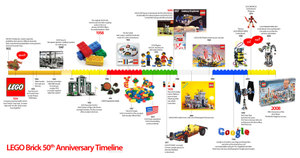 One of our favorite pastimes at Geekdad is the little plastic brick, which makes today a very important day. As evidenced by the banner over at Google, today is the 50th anniversary of the Lego.

• There are about 62 LEGO bricks for every one of the world’s 6 billion inhabitants.

• Children around the world spend 5 billion hours a year playing with LEGO bricks.

• More than 400 million people around the world have played with LEGO bricks.

Let It Rip! How Beyblades Are Teaching My Sons Science