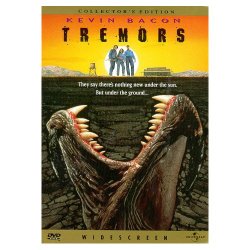 I consider scary movies to be as much of a Halloween tradition as candy, jack-o-lanterns, and sacrificing the innocent to Cromm Cruach to ensure a good harvest the following year (I do a lot of home gardening). Trouble is, there are few good horror movies that the whole family could enjoy. So I flipped through the TiVO menus and what little gem did I find? That’s right, all-time NRA favorite, “Tremors“. We watched. We cheered. We grew closer as a family.

Sex: there are only two sexual “points” in this movie. At one point, when Rhonda (Finn Carter) is being attacked by one of the creatures, she gets caught in some barbed wire and has to remove her pants to get free. I would say that scene is played much more for scares than jollies. She’s not wearing a thong, there are no excessive close-ups, and they quickly get her some jeans. At another point, earlier in the film, Valentine (Kevin Bacon) and Earl (Fred Ward) are driving up to meet Rhonda and Bacon loudly recites his requirements for a female companion. Said requirements are a bit sexist and explicit. True, his sexism is more or less displayed to us as a fault, but his language may not be deemed appropriate — or tasteful — for some viewers.

Violence: the only things that bleed in this movie aren’t human. Kids are generally okay with the monsters getting it. Probably the most violent scene in the movie is towards the beginning. There’s a retired couple who are building their house and currently living out of a trailer. The husband gets attacked by one of the creatures. His wife tries to help him avoid being pulled into the ground by putting a board underneath him. The board breaks beneath the force exerted by the creatures, and the man is pulled into the earth. The image of the board breaking, and the lack of an image of what’s exerting that force may make some kids scared. Other than that, there’s a lot of gunplay, but only against monsters. “Broke into the wrong damned rec room, didn’t ya!?!” may also be one of the best lines in film history. Thank you, Michael Gross.

Scariness: I found Tremors to be just scary enough. It isn’t a pulse-pounding J-Horror, or running-zombie-flick scary. It’s a “look out, you’re going to get sucked into the ground!” scary. That is to say, it got us excited, but not terrified. (Scariness side-note: our sense of what is scary changes over time. In the original Frankenstein, one of Karloff’s costars was so terrified of his Frankenstein makeup that he promised to always hold two fingers upstage, out of the camera shot, and wiggle them so she’d know it was still Boris underneath all of that gunk.)

Values: there really aren’t many values or ideals espoused in this movie. No one objects to destroying the creatures because they’re likely to be the last of their kind. I did like the fact that the female lead (Finn Carter) and supporting female lead (Reba McEntire) are smart, strong women. I also liked the fact that Finn Carter’s character is not presented as an overtly sexy character. She is not a Christmas Jones.

Conclusion: for the most part this movie presents good, clean family entertainment that is actually entertaining.

Editor’s Note: This is a personal favorite for me as well. It’s a classic, 1950’s “B” monster movie, turned on its side, with a healthy dash of humor thrown in as well. The genius to the film’s concept is having it be dangerous to literally set foot on the ground, but what makes it truly work are the fun characters. Michael Gross went on to make a number of sequels (none of them quite as original, but still fun), and even a short-lived TV series.