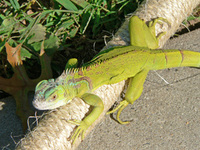 So, what exactly qualifies as the geekiest pet? (Pleo and the late Aibo do not count.)

Shortly after acquiring an Occelated Skink for the 4-year-old, I had a momentary episode of insanity and adopted a Green Iguana, which had been shunned by the students at the pre-school where my mother works. "Mr. Pickles" is still small (about 18 inches) but he is full of potential as he grows to nearly 7 feet! His diet must be hacked as we figure out the best combination of foods – and wean him off of lettuce. We must also mod his tank to give him the best simulated reality possible. Plus, he (she?) is the closest thing to a real dinosaur we can own without endangering ourselves. He’s offering great biology lessons. It warmed the cockles of my heart when whatever questions we had about him, the geeklets instantly shouted, "Let’s look it up!" I say the iguana qualifies. What other creatures get the honor of GeekPet?