In my quest for the perfect pan-tilt gimbal assembly for a small UAV, I’ve made one out of Lego and have some clumsy ones out of aluminum. Most commercial pan-tilt assemblies are made for much larger cameras than the ones we fly, or they’re incredibly expensive turrets meant for military and commercial UAVs. But I’ve hunted around and found three that appear to be within our size, weight and price range. How do they stack up? 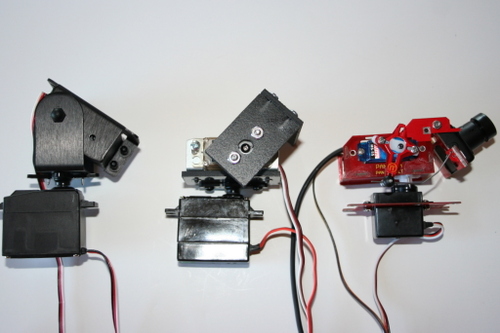 The three are (from left to right):

First, some general notes about all three. The most important thing is something you can see from the picture. The first two are designed for standard size servos, which are a bit big for our UAVs. Only the Pandora gimbal is designed for mini and micro servos. It’s also the only one specifically designed for the Panasonic KX-131 video camera (shown) that is commonly used in R/C aerial videography, and is the core of the RangeVideo system we use. I haven’t shown the other two with the KX-131 mounted (it’s a pretty simple matter of drilling some holes or using double sided foam tape), but you can see that it would make them much taller than the Pandora system (they’ll stick out almost twice as far).

The other two are intended for hobby robotics, where weight and size is not as big an issue as it is on planes.  Indeed, the Budget Robotics assembly isn’t meant for cameras at all (it’s intended for infrared sensors), although it works fine for them.

Another thing to keep in mind is that most of the stress in supporting a camera assembly is felt by the lower "pan" servo, so they tend to be bigger than the "tilt" servos (except in the case of the Lynxmotion one, where both are pretty beefy)

Here are the basic stats.

Most of the difference in weight is in the size of the servos. The other main difference is that the Pandora’s actuator arm. which allows it to have such a low profile, also limits the tilt range to just 60 degrees unless you overdrive your servos with some transmitter programming. That’s a trade-off that may be worth making, but it’s important to know all the same.

Here’s a video of them all in action:

For my money the Pandora is the way to go. It’s much smaller and lighter than the other two, and I can live with the reduced range. It’s more complicated to assemble (although I cheated and used superglue to accelerate the process), but worth it in the end with better flexibility and installation options.

I’m still planning to make an aluminum clone of the Lynx gimbal but for mini/micro servos, and we’ll see how that goes. The Lynx gimbal is a really nicely machined aluminum kit, and for something heavier than the KX 131, it’s the best way to go. The only one that didn’t stand up well is the Budget Robotics kit, which to be fair isn’t designed for cameras at all. Its sensor/camera platform isn’t supported on both sides like the Lynx’s is, and I’m worried that this will lead to shaking in the air due to motor vibrations.

A Google-a-Day Puzzle for July 8