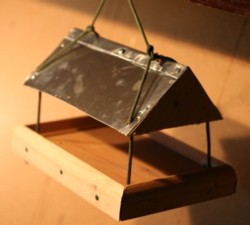 My son (6) has a ton of great project ideas for me. But, the next great idea often pushes the previous one out before the task is complete.  This tends to reduce my desire to start more projects with him, since I end up completing them or they sit on the shelf.

I’ve come up with a way for Dads like me to keep kids involved and see the project through.  Lower your standards to build it faster. Dovetails and CAD plans will come eventually.

That’s right.  The bird feeder we built as a gift for his Mom’s birthday may not win any awards for design, craftsmanship or durability. We completed it together and it has a nice, shiny roof to ‘let the squirrels slide off’.  She will love it.  He may have already forgotten we built it.

More after the jump

Materials breakdown:  (Your scrap bin may differ.) ~2 ft of parachute cord, Two roughly triangular pieces of wood from the scrap bin, molding for the bin sides, one 8-12" board as a base, some thin metal for the roof, assorted nails, screws and a sheetmetal screw. I used a cordless saw and drill to do most of the work. I tacked the roof down to the rafters with a nail gun along the edges.  I should have made him practice his knots from his new book, but I did it instead.

Tasks: Talk about each step as you perform it. Point out what you are doing and let them try a few things.

Measure:  Enough to get the proportions right.  I eyeballed the whole thing and only measured the base trim pieces.

Wooden stuff:  Drill holes in the base board at all four corners, drill each ‘rafter’ block on each side to match.  You will be threading the paracord through the holes, so a bigger hole helps.  Trim the molding to fit all around the edge of the base.  I added this last.  Mitering the corners is nice, but not necessary

Metal Stuff:  Position the metal roof piece at the lower edge of one of the ‘rafters’ and drill a hole to match those in the base. You should be able to hold up the roof, rafter and base and see all the way through. A quick indent with a nail will center the drill bit.  He got to hammer down the sharp edges after I drilled the holes.  He and I nailed the top of the metal to the rafter after pre-drilling a hole slightly smaller than the nail in the wood.

If you use two roof pieces, one will overlap the other on top, so don’t trim the metal until the roof is built.  He hammered the metal over the corner of a board to form the ridge.  I trimmed it with a scissors.

Rope Stuff:  Use equal lengths of rope on each side.  Thread the cord from the bottom of one edge of the base board, through the rafter and over the top where the process is reversed.  Knot the ends under the base board.  Repeat for the other side and adjust for height and symmetry.

Paint:  If you must.

I’ll be surprised if anyone repeats this project.  But it was a useful exercise for both of us.  It kept him with me in the Garage working on something we both wanted to do, at least until his baby brother woke up from a nap.