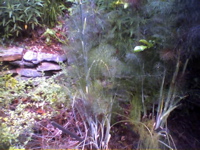 If I could pick one easy perennial to grow that would show a kid and a dad a lot about how life and metamorphosis work, it would be fennel (Foeniculum vulgare).

For years, we’ve been growing a little patch of fennel. The original idea was that it would give us some good fresh herbs to nibble on.

The first year that changed as our fennel became the host to two batches of Black Swallowtail (Papilio polyxenes) caterpillars also called parsley caterpillars. Starting with the little orange eggs and continuing to the stages of caterpillar maturation from worms that look like little bird dropping to the giant green and black thumb-sized dragons with their dramatically erupting orange horns (osmeterium). 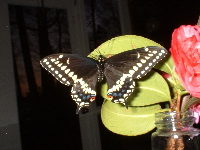 We started capturing a few and taking them inside to safely mature as we fed them fresh fennel in their new protected home each day. There you and your kids can distinguish between pseudopods  or prolegs on the caterpillars’ abdomen and the six true feet at what will be the thorax that will be come the butterflies’ legs.

In a few weeks they began to pupate. Usually the chrysalis is grey-brown, but often caterpillars will decide to become green chrysalis instead.

Then they took a sleep for the winter emerging as butterflies on our porch the next spring.

But our fennel experience didn’t stop with Black Swallowtails. Some years, a colony of praying mantis would appear. That colony would decrease in population every day — in part due to the cannibalistic tendencies of the nymphs — until by summer’s end, we had one large fat and happy mantis hiding in the fennel fronds. 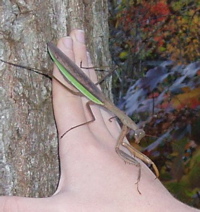 This year, deer discovered the fennel. They nipped it back into a tighter bush. This despite all claims that fennel is rabbit and deer resistant.

The rabbits, who have been circling the herb garden on the cool evenings, so far haven’t crossed the patch of oregano that encircles the fennel for their devastating munching.

No Joking: Feynman Is Brilliant